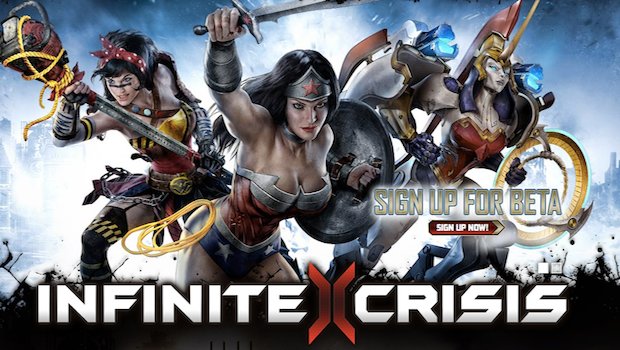 Today Warner Bros. Interactive Entertainment announced that starting on Wednesday, May 8th, DC comics buffs will be able to try their hand at the upcoming Infinite Crisis. The game is classified as a multiplayer online battle arena, or MOBA, meaning you’ll get to brawl to your heart’s content playing as characters from the DC universe, including Wonder Woman, Batman, Green Lantern, and tons more.

Some of the main features for this game include all-new characters that you’ll be able to discover, inspired by all 52 worlds of the DC Multiverse – covering basically anyone who’s ever existed – set in post-apocalyptic landscapes that are sure to get your imaginations running wild. Plus, the outcome of your PvP battles will have a direct influence on the rest of the world. From the press release: “Every match offers the opportunity to improve your ranking, leading to epic battles among top players.” That sounds pretty great to me. You’ll also to be forced to deal with catastrophic, life-changing events that happen in real-time within the environment, altering the map and forcing you to modify your strategy accordingly if you hope to survive. In other words, actions matter, which is something that everyone hopes for when they dive into an online community.

The game will be free-to-play, and features some pretty sexy graphics that seem to capture the flavor of the original illustrations in the comics themselves. This title looks ready to make a splash in the world of PC superhero gaming, so head on over to www.infinitecrisis.com today to put in the request for your Beta key, and find a ton more news, videos, and artwork than we could include here. The game is currently slated for a fall 2013 release, so check back often for the latest updates.