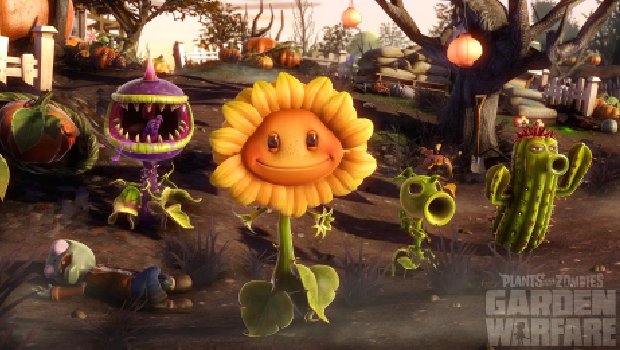 Shacknews has some information about Plants vs Zombies: Garden Warfare that’s sure to turn the heads of fans of the horticultural undead-slaying game. First comes the claim that Garden Warfare will be $39.99, making it the priciest entry into the Plants vs Zombies series so far. Considering Plants vs Zombies 2 released for the low low price of free, that will make Garden Warfare… you know, I think it’s literally ‘infinitely more expensive’ than PvZ 2. You may want to consult with a mathematician or a philosopher over that one, but regardless, it’s a low. Popcap’s reps seem to realize this and are pointing out that $39.99 is rather inexpensive compared to other titles we’ll be seeing on the Xbox One – I just hope the game has that much value. Shacknews also reports that the game will be ‘multiplayer-only’, featuring 24-player multiplayer matches, and a 4-player co-op mode – but really, I assume that you can just play co-op mode by yourself if you want. Is it truly multiplayer-only then? Once more, a question for the philosophers. It’s a metaphysical day here at Gaming Trend.

Really, as much as I’m a fan of the Plants vs Zombies series, I’m still skeptical that it’s going to smoothly make the transition from a 2D side-view quasi-tactical title to 3D multiplayer action. It’s not impossible, and I suppose if anyone can pull it off the fine people at Popcap can – “it’s just weird enough to work” seems like a good battlecry here. For now, though, fans of the original games can continue to be perplexed and/or mystified by these developments. Hey, if it turns out not to be your cup of tea, there’s always Plants vs Zombies 2, right?