The zombies….are coming.  Braaaaaaaains!  No, I’m not talking about that recently-released game from Capcom, I’m talking about Plants vs. Zombies!   EA and PopCap Games announced the release date for Plans vs. Zombies Garden Warfare, and it’s much closer than you think.  We’ll see it on Xbox One and Xbox 360 on February 18th in North America and February 20th in Europe!   Check it out:

Powered by the advanced Frostbite™ 3 engine, Plants vs. Zombies Garden Warfare features stunning, three-dimensional worlds, blooming with vibrant colors and unique landscapes. The game has more than 10 maps and three distinct modes including two 12v12 competitive multiplayer modes called Garden & Graveyards and Team Vanquish, and a four-player co-operative mode called Garden Ops. In Garden & Graveyards, plants must defend their garden bases from zombies attempting to turn them into spooky graveyards. Players can also square off in Team Vanquish as they try to send the other team to the compost pile. For gamers that just want to have a fun time with their friends, they can work together in Garden Ops battling off waves of zombies on the attack.

On Xbox One, Plants vs. Zombies Garden Warfare includes two extra modes including local cooperative split screen and Boss Mode. With split screen, players can team up with a friend on the couch to fight against an endless horde of zombies. In Boss Mode, gamers can utilize their Kinect or a SmartGlass device in any of the other gameplay modes to support their teams. Players have a top-down view of the battlefield and can help out their teammates with intel, health drops, revive stations and explosive artillery strikes.

The game is only $39.99 for Xbox One and $29.99 for Xbox 360, with the PC version hitting at a yet-unannounced date.  Check out the video above and the screenshots below to see why we gave this our E3 2013 “Biggest Surprise” award. 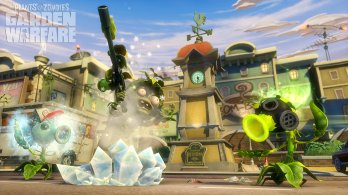 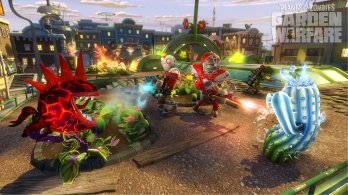 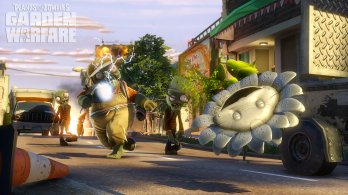 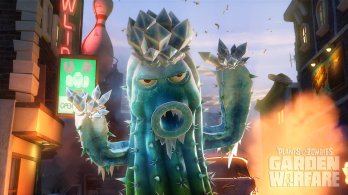