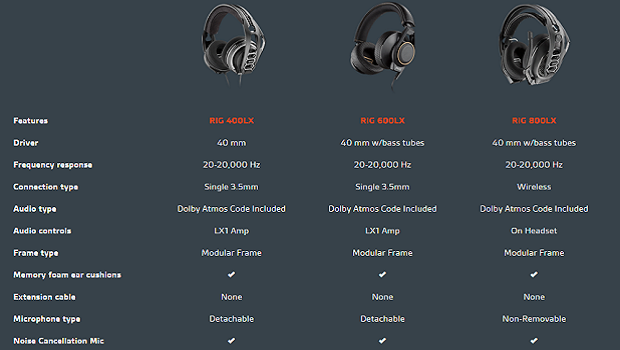 Plantronics recently announced a partnership with Dolby Laboratories to release a line of headsets utilizing Dolby technology. Plantronics aims to release the RIG 400LX, RIG 600LX, and wireless RIG 800LX headphones later this year, which will also provide free codes for the end user to activate Dolby Atmos at no additional cost on Xbox One and Windows 10 PCs.

“Since building the first modular gaming headset designed for the competitive player, we’ve challenged ourselves to explore how audio can improve gaming, whether it’s bringing gamers closer together or to the heart of the action,” said Jack Reynolds, Gaming Director for Plantronics. “We believe that gamers who invest in next-gen graphics deserve next-gen sound, and Dolby’s mission to transform entertainment makes them the perfect partner to create that heightened experience.”

Plantronics’s wired RIG 400LX and RIG 600LX models will include the LX1 pro level amp with three audio EQ modes, dual analog control-wheels for game/chat balance and an aux input for music. The RIG 400LX features 40 mm, high-sensitivity drivers while the RIG 600LX delivers a balanced soundstage with distortion-free bass that puts players in the middle of the action without masking subtle audio clues in-game.

Aside from these two models, Plantronics will also release the RIG 800 LX Wireless around the same time. The headset features 24-hour battery life and lag-free wireless connection to Xbox One, with 40 mm drivers, a noise-canceling microphone that does not pick up surrounding background noise, and four EQ settings to isolate pure highs, intensify mid-range, emphasize seismic bass, or enhance vocal focus.