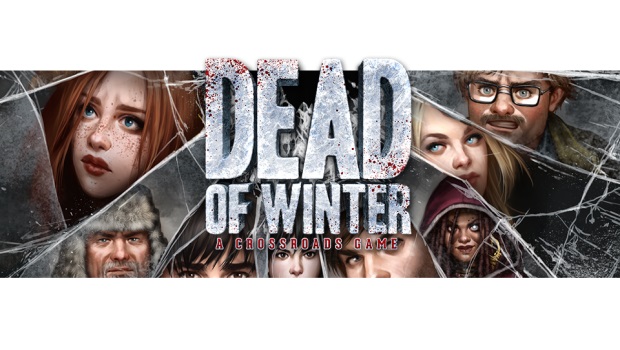 Ever get the feeling that players in co-operative games are too willing to “take one for the team”? Do you worry that in a real zombie apocalypse, your fellow survivors would look out for themselves FIRST, even at the expense of the group’s survival? YOU ARE NOT THE ONLY ONE. The crafty designers at Plaid Hat Games will release DEAD OF WINTER, the first game in their Crossroads series, which promises to redefine what it means to play a co-operative game.

In DEAD OF WINTER, the group has a goal they are all working towards, but EACH INDIVIDUAL MEMBER also has a SECRET objective, which may or may not be at odds with the group’s goal.

Dead of Winter is an experience that can only be accomplished through the medium of tabletop games. It is a story-centric game about surviving through a harsh winter in an apocalyptic world. The survivors are all dealing with their own psychological imperatives but must still find a way to work together to fight off outside threats, resolve crises, find food and supplies, and keep the colony’s morale up.

They are calling this a “meta-cooperative game”, and it looks like an innovative way to avoid the common trap in co-op games: one player “solves” the puzzle and tells the other players what to do.

Players who pre-order will not only save $20 off the retail price, they will also receive components for an additional character: “Kodiak Colby, Woodsman”. You can sign up for the Plaid Hat newsletter to find out when DEAD OF WINTER becomes available in their online store.