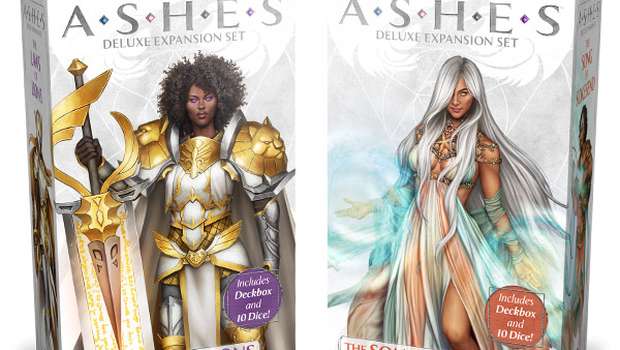 While Ashes seemed to be a hot ticket item at one time, the excitement seems to have died down recently.  However, Plaid Hat Games just made an announcement that should generate a lot of new buzz.

I know, I know, I KNOW it has been forever! Sorry to everyone that has been upset about the silence. Believe me, we didn’t want to keep quiet this long, but in order to get things figured out we had to keep details internal for a while.

We have been working with our new parent company – Asmodee – to bring you some new amazing stuff in the Ashes line. The transition has been going great! They have been so awesome and helpful throughout this shift. Everything that we have been doing is really helping to make Plaid Hat Games better, and we couldn’t be happier!

Fan: Enough of the Plaid Hat Asmodee romance… where are my cards!?

Ok, ok! Without further ado, here is what we can announce at this time:

The next two expansions for Ashes are “The Law of Lions” and “The Song of Soaksend”.

These two Deluxe Expansion Sets are slated for release in late spring / early summer. As we have done before, we will begin to preview the cards and dice abilities closer to release date, so stay tuned for those announcements in the near future.

Fan: But Isaac! Isaac! That is waaaay too far away! What am I supposed to do in the mean time?

Play, you wonderful people, Play! Together with Asmodee, we have put together an event that will release next month. This event is called, “The War Within”. Through a series of tournaments hosted by local game stores, players will have the opprotunity to determine the looks and abilites of an unnamed Phoenixborn. The “War Within” event is meant to represent her internal struggle, and how she wants to approach the war that she must soon be a part of.

We’ll have more information soon on this event, as well as how stores and players can participate.

You can find a lot more detail on their announcement page, including organized play kits.