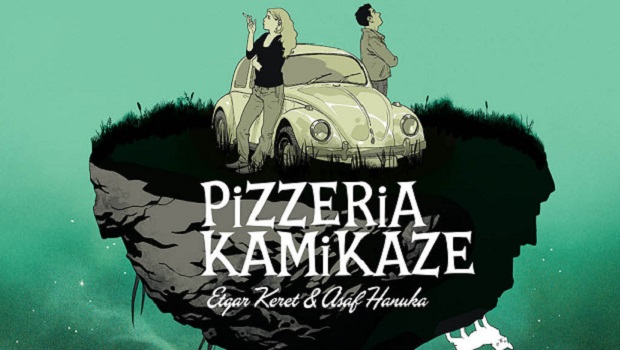 Today, Boom! Studios announced that it will publish a new hardcover edition of Etgar Keret’s graphic novel Pizzeria Kamikaze. The book will be presented in full color for the first time since its debut in 2006.

In PIZZERIA KAMIKAZE, after committing suicide, narrator Mordy is condemned to an afterlife where he still has to attend a crappy job in a place no less crappy than the place he came from. When he discovers that his beloved ex-girlfriend is there, too, he embarks on a much-needed road trip through an absurdist and fantastical landscape to find her.

“What was both surprising and beautiful, from my perspective, was that the original black-and-white PIZZERIA KAMIKAZE and the film were both amazing adaptations and each had a completely different tone and sensibility but, at the same time, both of them were incredibly moving and loyal to the text,” says Keret, who wrote Kneller’s Happy Campers after an ex-girlfriend tragically passed away. “As a writer, you can meet your reader but will never really know what they’ve experienced when they’ve read your text. These two adaptations were a rare chance for me to take a peek into the mind of two brilliant and talented artists and I feel very lucky and very grateful for that.”