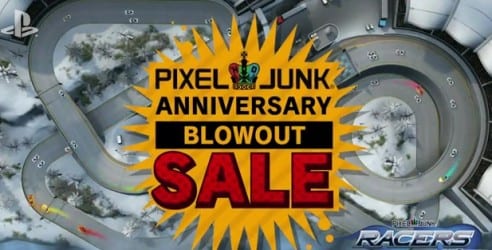 In a post on the PlayStation Blog yesterday, Dylan Cuthbert of Q-Games announced that there would be a huge sale on PixelJunk titles starting today. Whether you’re totally new to PixelJunk or an old fan with a few games missing from your collection, now would be the best time to pick them up; prices start as low as just one dollar. The sale, meant to celebrate Q-Games’ tenth year, PixelJunk’s fifth year, and the release of PixelJunk 4am a week from today, will go live this afternoon following a PS Store update. The full list of games and prices is after the break.

The PixelJunk series has been a huge success for us, so to celebrate Q’s 10th anniversary (and also PixelJunk’s fifth), for a limited time we are slashing the prices of Racers, Monsters, Eden, and Shooter to just ONE DOLLAR. Yes, you heard correctly! On top of this, we are also slashing the prices for PixelJunk Monsters Deluxe (PSP), PixelJunk Shooter 2 and PixelJunk SideScroller by HALF! You have no choice but to snap them all up the very moment the sale goes live tomorrow afternoon with the PlayStation Store update! Spread the word and let’s go PixelJunk crazy for a week! Actually, make that TWO weeks because after the sale, PixelJunk 4am will be launched (May 15th) and it is simply an incredibly unique experience.

The sale prices, in summary: