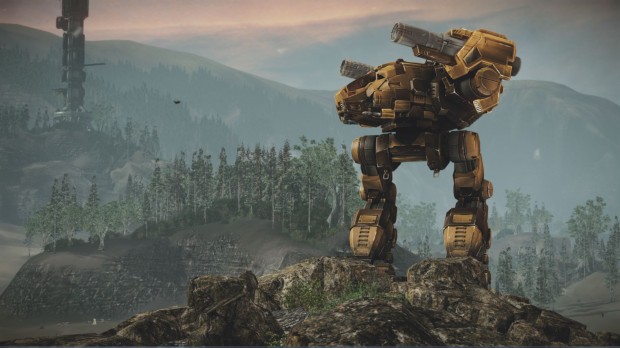 If you’ve ever read any of my work here on Gaming Trend, you know how much a fan I am of the MechWarrior franchise.  I’ve been playing these games since I was knee-high to a grasshopper, so you can only imagine how excited I was when I got the chance to talk with Russ Bullock and Bryan Ekman, the President and Creative Director respectively of Piranha Games–the studio behind the latest re-imagining of my beloved MechWarrior. When asked why they chose to revitalize the long-dormant Mech combat franchise, Bullock said “MechWarrior is an extremely strong brand.  The genre never died,” before explaining that though the MechWarrior games had all been hits, Microsoft had been too busy with other projects to generate another title in the series.

Both Bullock and Ekman were excited to discuss both how far the game has come, as well as the milestones along the way to the game’s official launch.   Bullock and Ekman admitted there were some rough patches in the early days after the game’s beta began–veterans of the early days of MechWarrior Online remember when long-ranged missile boats were the only viable loadout–but pointed at the dramatic improvement in the game’s balance since then.  They explained that many of the early balance issues came from giving the players a higher-than-intended balance loadout by augmenting weapons without reducing their damage. An example was the introduction of an optional targeting computer that–when equipped–made missiles unexpectedly lethal.  “As we’ve fixed bugs, or added ‘Mechs, we’ve had to tune the damage models.” Ekman said. “The balance is never done.”

[singlepic id=11410 w=320 h=240 float=left]Both Bullock and Ekman were eager to talk about the new features coming into the game as Mechwarrior Online neared it’s official release.  Several of these features have already been implemented, including an improved Mechlab interface and the addition of ‘Mech camouflage.  A big part of the picture is improving the noob experience by offering new UI features and controls, as well as an offline mode in which to test our your ‘Mech and explore the maps.  When I asked if the new UI and control features were suggestions from the community or ideas the developers had planned to implement, Ekman replied, “Both. We generally know what our game needs, but we like to look to the community  to see how they would like things to go.”

Bullock expects the game to launch sometime before October, and foresees continual improvement in MechWarrior Online between now and then, but was particularly excited about three main features.  The first is an increase in match size to 12 vs 12.  “You’ll 33% more mechs in a game,” Bullock explained.  “You’ll be able to divide up your forces in a match.”  The second big feature to be implemented prior the launch is a major improvement to the user interface on the front-end of the client.  “We call the current UI version 1.5, but there’s still a lot we can do to help breadcrumb new players along.”  They expect to make the UI more polished, and a bit less imposing than it currently is.[singlepic id=11411 w=320 h=240 float=right]

The final feature that remains to be implemented is the addition of large-scale community warfare.  “It’s the one thing players have been screaming for,” explained Bullock.  Players will be able to join one of the Great Houses or form a Mercenary Corps  and fight for control of virtual planets on a virtual map of the Inner Sphere.  Holding control of a planet will grant players bonuses, giving them incentives to fight for their house.  Each house will have a slightly different economy, as well–House Davion might have cheaper access to certain ‘Mechs or weapons than House Kurita.  Truly dedicated players can band together to form Merc Corps, which will serve as MechWarrior Online’s version of guilds or clans.

Speaking of clans, any MechWarrior fan will tell you that many of the most iconic ‘Mechs arrive on the scene in an in-cannon event known as the “Clan Invasions.” When I asked the pair when we could expect to see some of our favorite Clan ‘Mechs, they replied “We’re focused on launch.  Clans is the very next thing…after launch.”