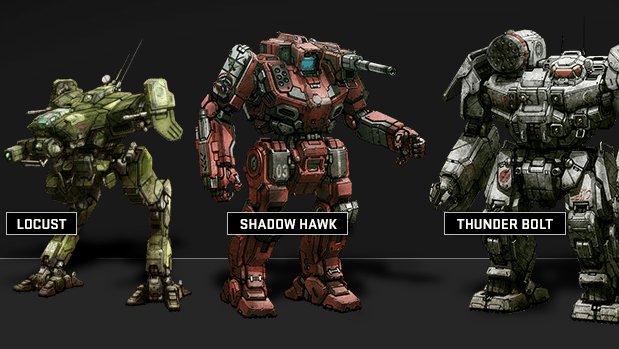 PGI did it!  Reseen ‘Mechs are back! We’re getting four reseen ‘Mechs in MechWarrior Online!  Later this year you’ll be able to crawl into the Locust, Shadow Hawk, Thunder Bolt, and the Battlemaster (not pictured).

For those of you out there who don’t follow 20 year old copyright cases, let me give you a bit of background.  As you know, the long-running MechWarrior franchise is an offshoot of the longer-running BattleTech universe, first established in the titular tabletop wargame.  When BattleTech was being designed, several of the artists got a bit clearly drew inspiration from Japanese mecha-anime.  In fact, they were a little too inspired, and several of the original ‘Mechs were deemed to be copyright violations and FASA (the original publisher of the BattleTech series) was forced to remove them.  These ‘Mechs, collectively known as the “unseen” tended to be some of the favorite early ‘Mechs. A few years later, BattleTech was able to strike licensing deals with some of the aggrieved parties, and brought some of the unseen ‘Mechs back.  These new mechs are called “Reseen.”

It would appear that PGI was able to reach a deal with the same people, as four of the “reseen” ‘Mechs are due to appear in your favorite robot combat simulator.  PGI is having another founder’s sale, giving players access to a range of bonuses and custom ‘Mech skins if users purchase one of the various tiers, at prices ranging from $40 to $80.

As to whether or not the original copyright infringement case was real or not…compare Macross’s Glaug with BattleTech’s Marauder, and reach your own conclusion.