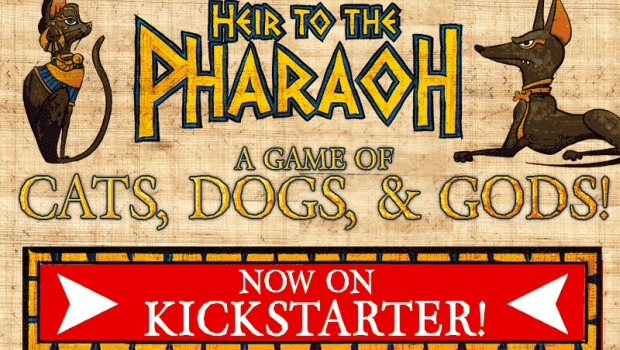 In Egyptian times, it wasn’t uncommon for a pet to be mummified with its owner.  But if you were the pet, how would indicate to the Pharaoh that you wanted to spend your time with him encased in the tomb?  Well, in Rise of the Pharaoh, you get to answer that question.

Heir to the Pharaoh is a cunning game of cats, dogs and quarreling gods in the sands of ancient Egypt. Designed by Alf Seegert with art by Brian Kohrman, it is for 2 players only and lasts 45 minutes to an hour. Ancient Egypt is going to the dogs – or maybe to the cats? Displeased by his children, the Pharaoh favors his pets instead. He has decided to alter the lines of succession and will bequeath his entire kingdom either to the feline goddess Bast or to the canine god Anubis. But which one?

In Heir to the Pharaoh, you and your opponent play as Bast and Anubis, each one vying for the Pharaoh’s affection – and for his throne! Impress the Pharaoh by digging your mighty paws into the sand. Build majestic Shrines, Sun Temples and Obelisks! Use Animal Magic to unleash the power of the gods, who will help you win the favor of the Pharaoh!

The player who claws their way to victory will be the new top dog (or fat cat!) and become the newly appointed Heir to the Pharaoh!

It’s definitely a unique concept.  If you want to find out more, check out their Kickstarter page.