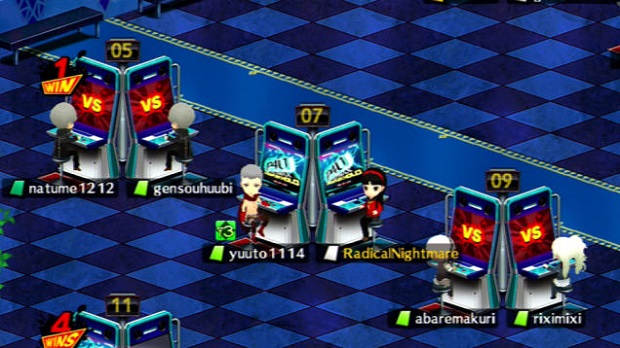 The online lobby mode of Persona 4 Arena Ultimax seems to be referencing the days where arcades were the primary way people played fighting games.

Kotaku has shown some images of the game’s online lobby and how it actually makes the process of finding online matches easier and less time-consuming that in Persona 4 Arena.

Players will be able to choose an avatar of any of the game’s roster and sit down at virtual arcade cabinets to either wait for other players to challenge those who are already waiting.

You can look at the player cards of those within the lobby in order to know what you’ll be getting into by challenging any of your potential opponents.

Recently, Atlus spoke out about fans spoiling Persona 4 Arena Ultimax for other fans who live in territories where the game has yet to be released, pleading that those playing Ultimax before others keep the internet spoiler-free for those who can’t yet play. Atlus also released the game’s opening cinematic to whet fans appetite before the game comes out for PlayStation 3 and Xbox 360 on September 30th.

For more on Persona 4 Arena Ultimax, check out our preview from this year’s E3.

Elsewhere in the Persona space, Atlus confirmed that Persona 5 would be coming to PlayStation 4 and released the first look at the game’s main protagonist.