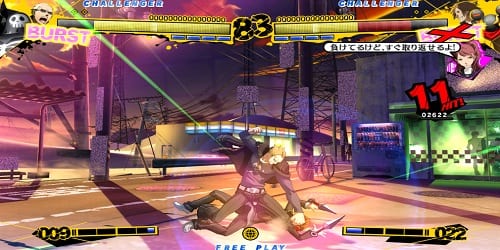 Did you enjoy the Shin Megami Tensei: Persona series of RPGs, but wish they had more action? Persona 4 Arena will feature the characters from Persona 3 and 4 in a spinoff 2D fighting game that will build on the story of the original Persona 4. To help prepare gamers for the challenge of battle, Atlus will be releasing a series of tutorial trailers as the release of Persona 4 Arena approaches. The first tutorial, released today, will help players learn to controls for the game before it comes to PS3 and 360 this summer.

Fighting in an arena… Well, it can be a tricky business.  First, there’s that part where you kind of can’t run away from your enemy.  It IS an arena after all.  And then there’s that bit where you get punched in the face repeatedly.  Not pleasant.

That’s why it’s SO important for future arena-destined fighters to learn more about the controls and skills that will help them to victory, and it’s also why we’re releasing this first video tutorial for the upcoming PS3/360 fighting game spinoff of the acclaimed Persona series of role-playing games: Persona 4 Arena.

Persona 4 Arena was released in Japan for arcades earlier this year, and will be coming to consoles in North America this August. Get a head start on preparation by watching the tutorial video below.