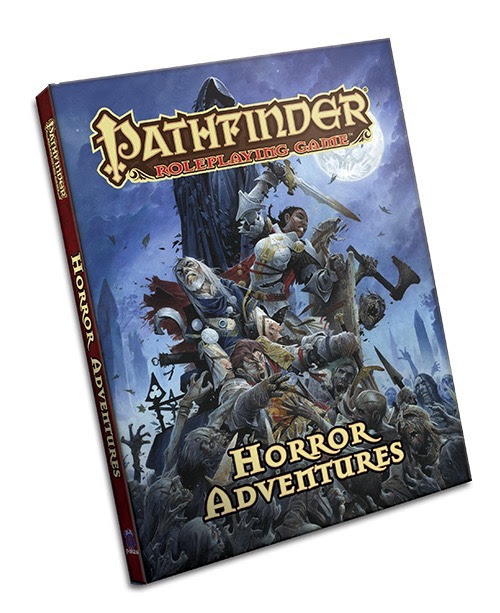 Pathfinder has been expanding into uncharted territory recently, getting the greatest use possible out of its license (especially including the new Starfinder announcement). Recently we have seen releases dealing in the occult and political intrigue, and today those options increase to include Horror Adventures, a supplement to test your sanity and stomach in the Pathfinder universe.

There are things that dwell in the dark places of the world, deep beneath the ground, in long-abandoned crypts, or in musty attics; terrible things that can destroy your body and shatter your mind. Few sane individuals would ever think to seek out such nightmares, but those that are drawn into the darkness often find it infecting them, corrupting them in ways both subtle and gross. Some think that those who die facing off against such horrors are the lucky ones, for the survivors are forever scarred by their experiences. Horror Adventures gives you everything you need to bring these nightmares to your game.

Characters can take far more than a few hit points of damage when their very sanity is called into question from witnessing horrors too terrible to comprehend. To face such nightmares, the heroes can take new feats, utilize powerful spells, and even acquire holy relics to aid them. They will need every edge they can get if they plan to survive the secrets of this book.

This supplement is available from Paizo itself as well as many local stores.