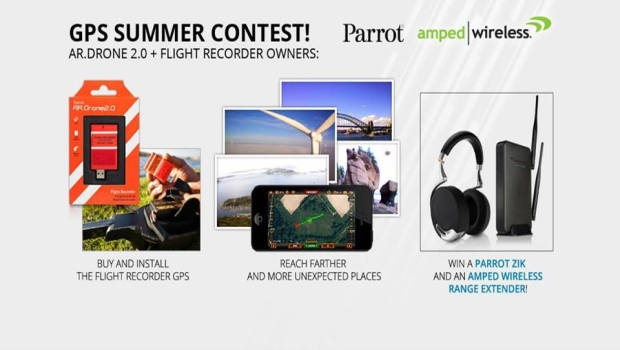 I once earned a Gen-1 Parrot Drone for kicking some serious tail at a THQ event (Homefront, specifically) and racking up over 25 kills in a row. Well, those of you who have an AR.Drone 2.0 have a chance to pick up a long-range WiFi extender from Amped Wireless, drastically increasing the flight radius of the AR.Drone 2.0. You’ll also get a pair of Parrot Zik Bluetooth noise cancelling Headphones with touch controls as well. How do you enter? Simple – between now and September 15th, 2013, drone pilots can use the GPS Flight Recorder app and post videos to YouTube filmed via the onboard HD camera. The winner will be chosen from the submissions based on the “uniqueness of the drone’s flight” and the shooting location. Pretty simple – do awesome things with the drone and record it! Fire up the GPS Flight Recorder, mark the starting and ending location of the flight, and tag the video with ARDRONEGPSCONTEST. If you’ve got an AR Parrot Drone 2.0

, you might want to check it out! Here are the details and rules, as well as an instructional video of how to enter:

THE CONTEST:
-Use your AR.Drone 2.0 and your Flight Recorder GPS to reach unexpected places!
-See our tutorial video here:

HOW TO PARTICIPATE:
-Send us your video and don’t forget to tag your video with “ARDRONEGPSCONTEST” on YouTube!

New contest where pilots submit YouTube videos to show how far they can go with the Parrot AR.Drone 2.0 using our new GPS Flight Recorder module to mark starting locations and ending locations. Pilots would use the AR.Drone 2.0 flight and record them, then submit to the contest via YouTube.
The best video with unusual place will win a Parrot ZIK headphones and the new Amped Wireless Wi-Fi Range Extender!