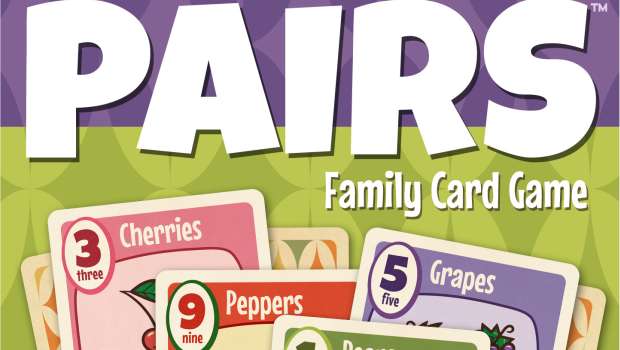 Pairs is a game that uses a unique deck of cards called a pyramid deck.  Several different themed Pairs decks have been released, but the most common is a fruits and vegetables deck.  Now that will be coming with with a deluxe version that includes many games that will use that deck.

Building on the success of Pairs: A New Classic CardGame, Cheapass Games is releasing a deluxe edition that includes a brand-new deck illustrated in a fun retro style along with a Pairs Companion booklet.

Pairs is simple card game with a basic triangle deck: 55 cards numbered 1 through 10, with 1×1 2×2, 3×3, and so on up to 10×10. In the basic game, players take turns drawing cards and trying not to score a pair. Or, they may fold, and score the lowest card in play. The first player to score too many points loses the game.

The Pairs Companion contains over 30 fan-favorite games and variants that can be played with a Pairs deck, including The Judge, Deadfall, Hawthorn, and more. Some games require chips and/or a way to keep score.

Deluxe Pairs will retail for $17. It is expected to debut at Gen Con at Cheapass Games booth 1361 and will be available shortly thereafter online and in friendly local game stores.

That’s a lot of game for not a lot of money.  Look for it towards the end of August.