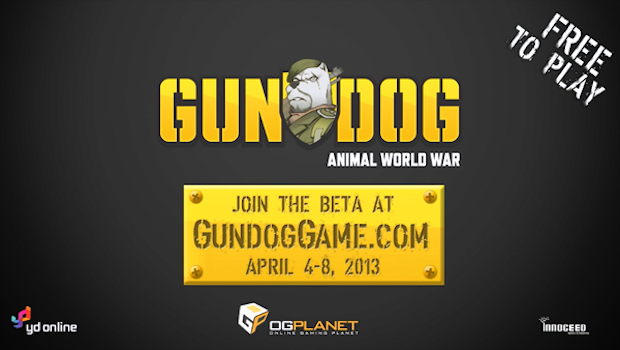 Online free-to-play publisher OGPlanet has announced its latest upcoming title, a raucous third-person shooter called GUNDOG featuring dog soldiers (literally) fighting on a variety of battlefields. Players will have the ability to select between several different classes, packing all the firepower and perks you’d expect in an online run-and-gun. OGPlanet has teamed up with Seoul-based developer Innoceed to produce the title.

The game boasts some handsome cel-shaded graphics that should satisfy gamers looking to get more comic book-type stylization into their diets, and the trailer shows off the helter-skelter atmosphere that usually makes for a pretty engaging online battle experience. Furthermore, the locations and weapons look to be World War 2-inspired, which seems like the perfect era for man’s best friend to test the speed of that itchy trigger-paw.

Simple, yet powerful weapons, lots of colorful explosions, and great graphics should make for a highly engaging experience, but gunplay isn’t all this title will feature; the ability to collect playing cards that you find in-game will unlock some interesting features, and add a dose of strategic depth to a game that others might criticize as a bit mindless. If you’re looking for an extremely fast-paced shoot-’em-up that focuses more on humor and competition à la Team Fortress, and less on actual gore and violence, then you’ll probably find that these puppies are barking up the right tree.

“We’re really excited to bring GUNDOG to our player community,” said OGPlanet CEO, Sangchul Park. “Between the distinctive art style, the intense team-based combat, and the addictive card-collection elements, we think players will love what GUNDOG has to offer.”

The card elements and unlockable characters should open up a lot of bonus features the more you play, and given the addictive nature of the ubiquitous online shooter genre, putting in the required amount of practice should not be a burdensome task.

OGPlanet has announced that you can stop by gundoggame.com to sign up for Beta testing access, which will take place from April 4-8th, 2013. Check out the trailer below to see some of the off-the-leash action this release promises to deliver.