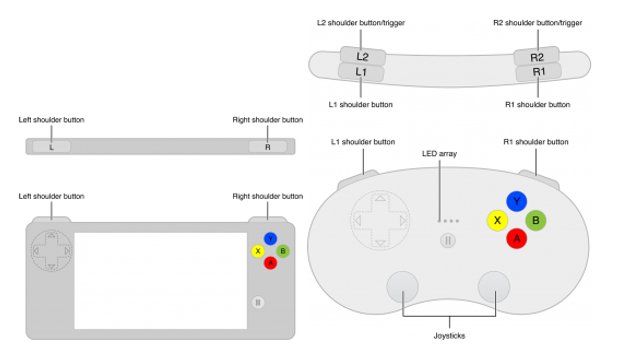 Toucharcade has some interesting news from Apple’s World Wide Developer’s Conference.  Apparently some information has been leaked from Apple’s official developer site, showing mockups of controllers for their systems – quite possibly meant to be used as general guidelines for developers. The lack of an old-school style interface for game apps has been one of the long-standing problems with iOS gaming – you can make great games using only a touch-screen interface, but the fact is you have to make very different kinds of games than you would if you had access to a D-pad and actual, reliable buttons. If Apple is gearing up to release some officially supported and appropriately tactile controllers for their iPad and iPhone devices, it can be a major boon for an already incredibly popular iOS gaming market.

Looking at the two controllers Toucharcade has sniffed out, the concept seems pretty straightforward. The device on the left seems clearly to be something for sliding the iPhone into, doubling as a case as well as a controller. On the right is a more classic controller, probably meant for iPad use – or maybe for a different device altogether. Either way, as someone who games heavily on the iOS devices, all I can say to these potential developments is ‘it’s about time’.