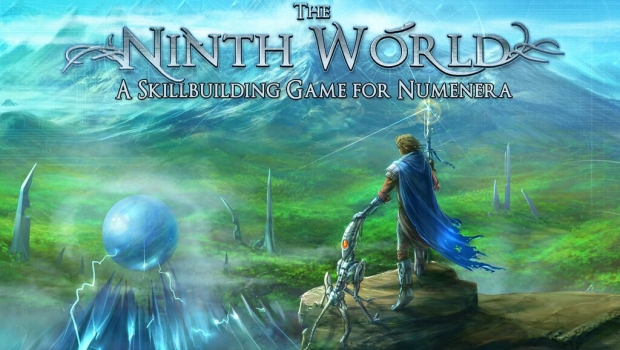 While most gamers might think of Shadowrun when asked for the name of a sci-fi RPG system, the Numenera system has been gaining in popularity.  Designed by Monte Cook, the game system was funded by Kickstarter in a world a billion years into the future.  Now they are breaking away from a strict RPG and implementing a card-based system in The Ninth World: A Skillbuilding Game for Numenera.

Lone Shark Games, the creators of the Pathfinder Adventure Card Game, has teamed up with acclaimed game designer Paul Peterson (Smash-Up, Guillotine) and the team at Monte Cook Games to create The Ninth World: A Skillbuilding Game for Numenera. Coming to Kickstarter December 15th 2015

The Ninth World is a competitive card game for 2 to 5 players, and is designed by Paul Peterson, Boyan Radakovich, and Mike Selinker, with graphics by Shane Tyree and the artists of Numenera. The team at Monte Cook Games is also deeply involved in making this game what it is today.

“This is unlike anything we’ve ever done before,” said Mike Selinker, Lone Shark Games. “We’ve joined the worlds of RPGs and boardgames with thePathfinder Adventure Card Game and the upcoming Apocrypha Adventure Card Game, but now we’re bringing that inclusive vision to a competitive card game set a billion years in the future.”

What really makes Numenera unique is the fact that you create a character based on a phrase using an adjective, noun, and verb.  Once you have this, you can start on your adventure.  With assistance from Lone Shark Games and Mike Selinker, one of the minds behind the Pathfinder Adventure Card Game, and Paul Peterson, this sounds like it could be a truly unique game experience.  You can head to their Kickstarter page to find out more and even download a print and play version of the game.  It’s only been up for a day and they are almost over halfway there, so it’s incredibly likely that this will fund.