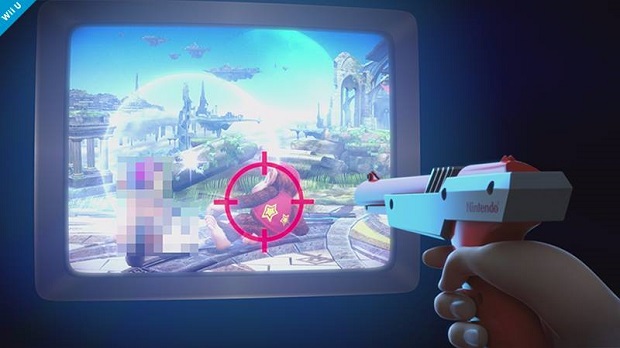 Nintendo appears to be hinting at a proper reveal trailer for one of the secret characters in Super Smash Bros. for Wii U.

An image posted on the game’s official Facebook page seems to be teasing a reveal trailer for the Duck Hunt Dog that is playable in both the Wii U version of Super Smash Bros., as well as the recently released 3DS version.

The image is an edited version of an ad for the NES Zapper, an accessory used to play the NES game Duck Hunt from which the character originates.

”Here’s what’s happening behind the scenes in one of the secret fighter’s shooting moves. The object being held is called an NES Zapper. This is an accessory which was released for the NES outside of Japan. Now, this image is edited, but it’s a scene from the secret fighter’s reveal video.”

This trailer may be revealed through the upcoming Smash-centric Nintendo Direct. The Wii U version of the game is coming out on November 21st alongside the first set of Amiibo figures.

For more on Super Smash Bros., check out the Gaming Trend review of the 3DS version, as well as some characters we still want to see make an appearance in the series.