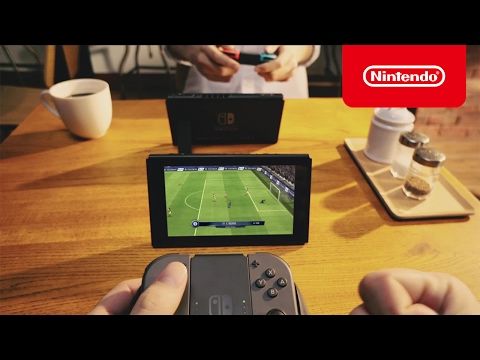 Nintendo today launched a new TV ad in Japan for the Switch, and it gives us our first look at FIFA 18 on the portable home console.


Confirmation of a FIFA game coming to Switch first came from Executive VP of EA Patrick Söderlund. Speaking at Nintendo’s live Switch presentation last month, Söderlund referred to the game as “FIFA on Nintendo Switch,” causing some confusion as to whether this would be FIFA 18 (which is expected to launch on Xbox One, PS4, Xbox 360, and PS3 later this year) or, perhaps, a port of an older FIFA iteration. EA’s Chief Competition Officer Peter Moore later confirmed (speaking at a FIFA event in Paris) that the Switch game “will be FIFA 18,” and it will be released later this year. (FIFA 18 is slated for a September release on other consoles.)

FIFA is one of the few game franchises still appearing on both last-gen and current-gen hardware, so we still don’t know whether this version of FIFA 18 will be built using last-gen’s Ignite engine, or the superior Frostbite engine. According to Tom Morgan of Digital Foundry (Eurogamer’s technical analysis team), the footage seen in the Japanese ad showed “no sign of [the Frostbite engine’s] improved lighting so far, but the stadia and players are still close to what we have on PS4 and Xbox One.”

Nintendo Switch launches worldwide on March 3, 2017. FIFA 18 is one of the several local multiplayer games coming to the Switch this year.