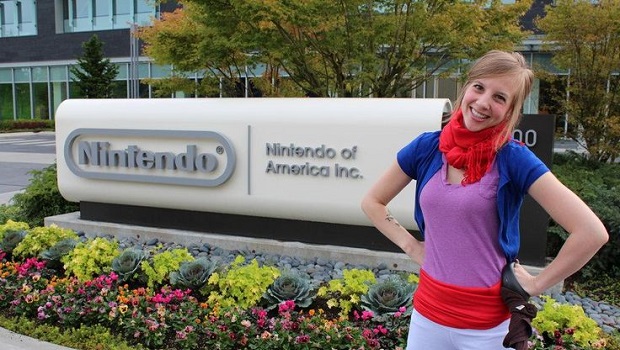 Update Two: Following Nintendo’s very public termination of former employee Alison Rapp, Nintendo released an official statement saying its decision was made due to Rapp “[violating] an internal company policy involving holding a second job in conflict with Nintendo’s corporate culture.” In a series of Tweets, Rapp has disputed Nintendo’s statement, claiming moonlighting is accepted as part of the company’s policy.

According to Rapp, to pay off college loans she moonlit — no links were provided — under a false name “with no real identifiers.” But, continuing in another Tweet, an anonymous source caught wind of her outside work, notifying Nintendo and ultimately leading to her termination.

To pay off student loans (weeee), I started moonlighting under a fake name, and with no real identifiers.

“It was moonlighting Nintendo didn’t like,” Rapp wrote, “despite the fact that it was anonymous.”

At the time of this article, the situation between Rapp and Nintendo is still messy, with several facts not yet made public. We will continue to observe and update this story as more information is made available.

Update: Nintendo has released a statement regarding Rapp’s termination to IGN denying that it was at all related to controversy she had been subject to in recent months, but rather a violation of company policy.

“Alison Rapp was terminated due to violation of an internal company policy involving holding a second job in conflict with Nintendo’s corporate culture. Though Ms. Rapp’s termination follows her being the subject of criticism from certain groups via social media several weeks ago, the two are absolutely not related. Nintendo is a company committed to fostering inclusion and diversity in both our company and the broader video game industry and we firmly reject the harassment of individuals based on gender, race or personal beliefs. We wish Ms. Rapp well in her future endeavors.”

Amidst months of controversy surrounding its employee Alison Rapp and the GamerGate community, Nintendo has made the decision to end her position with the company.

Taking to Twitter to announce her termination, Rapp claims the choice was made due to her “no longer [being] a good, safe representative of Nintendo.”

Today, the decision was made: I am no longer a good, safe representative of Nintendo, and my employment has been terminated.

She continues in a later Tweet that due to confidentiality agreements, she can’t go too deep into specifics of the situation with her now-former employer.

Rapp was initially targeted by the group GamerGate, a nebulous advocacy group also notorious for claims of harassment and hate speech, often directed towards female members of the game industry, after she was accused of trying to censor the recent Wii U game, Xenoblade Chronicles X.

Rapp has stated on her Twitter multiple times this was a decision she had no control over.

The reality is, I actually had no involvement with localized content changes of any kind. Come on, I *wanted* the XCX boob slider!

Our hearts go out to Rapp and any others affected by this decision.