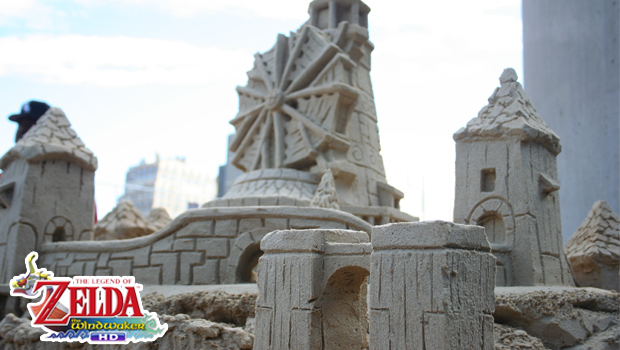 You might not have guessed it from the name, but there are tons of video games at NY Comic Con, and no gaming presence is more largely felt at this year’s convention than Nintendo.

[singlepic id=16666 w=320 h=240 float=left]Without a next gen showing from either Microsoft or Sony, Nintendo is given virtually free range over the convention floor. Firmly planted in the center of the main showroom, the Nintendo booth is constantly packed with fans waiting for their chance to play unreleased titles like Super Mario 3D Worlds, Donkey Kong Country: Tropical Freeze and Sonic Lost World. Probably the most buzz is surrounding the demo display for Bayonetta 2 and after a quick run through, it’s easy to see why.[singlepic id=16665 w=320 h=240 float=right]

The chaotic gameplay is a fireworks display of lightning fast moves and gorgeously executed action. Developed by Platinum Games, this sequel looks and plays much like the original. You hit the ground running on the top of a speeding jet, immediately battling demons using a flurry of combos and an arsenal of magic-infused moves that make every encounter an adrenaline-drenched joy to behold. The demo progresses onto a speeding train and eventually a boss battle up the side and to the top of the iconic Empire State Building.

With a full magic gauge, you can execute Bayonetta’s torture attacks, one of which puts the demon on a speeding treadmill with a giant meat grinder at the end. Naturally the demon can’t keep up with the treadmill and he explodes in an ocean of crimson and bone. I had to wait in a long line packed shoulder-to-shoulder for my chance at the Wii U display, but it was well worth it.

[singlepic id=16664 w=320 h=240 float=left]Outside of main booth, Nintendo lead producer, Eiji Aonuma, gave a special presentation involving Legend of Zelda: A Link Between Worlds for 3DS. The game’s premise centers on moving between the dimensions of Hyrule and Lorule. The mirror world of Lorule even has its own Zelda-type character known as Princess Hilda. The bridge and interaction between these two worlds is what propels the story forward. The game looks great and after a play through on the showroom floor, I’m looking forward to the game’s release on Nov. 22nd. It’s a very exciting time to own a 3DS.

Another interesting location off the beaten path of the convention is Nintendo’s competitive gaming room, a place where players compete for a variety of prizes including the  grand prize of a limited edition Legend of Zelda Wii U autographed by Eiji Aonuma. I ran into Paulo, the winner of the Grand Championship, who was modest enough to say he didn’t even think he was a good gamer and admitted he considers himself lucky.[singlepic id=16667 w=320 h=240 float=right]

As things begin to wrap up during the waning hours of New York Comic Con, we’ll be right here on the floor taking in the excitement until the bitter end.  You can check back here with us at Gaming Trend for post Convention news.