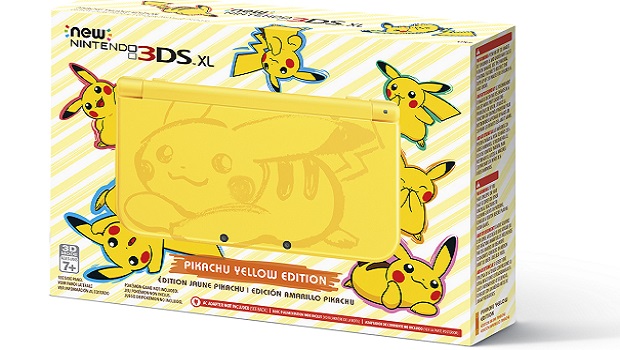 With the successful launch of Pokémon Sun and Moon last November, Nintendo announced today plans to release a Pikachu-themed New Nintendo 3DS XL in February. As previously mentioned in last September’s Nintendo Direct, there are a few first-party 3DS titles that will be released this year as well as a couple of 3DS entries in the Nintendo Selects budget line.

Fresh off the critically acclaimed Pokémon Sun and Moon, the Pokémon franchise has seen no shortage of game-related merchandise. On February 24, a yellow-colored New Nintendo 3DS featuring Pikachu will be released to stores for the SRP of $199.99. The New Nintendo 3DS model comes equipped with NFC technology to read Amiibo figures and Amiibo cards, and boasts better specifications that allow titles like Xenoblade Chronicles 3D and SNES classics to be played on the handheld.

Previously announced, Poochy & Yoshi’s Woolly World is a 3DS version of the Wii U game. The game will include new features like the ability to play through unique stages as Poochy, stop-motion videos featuring the duo, and a Craft Yoshi editor. The title will launch on February 3 alongside a bundle with Yarn Poochy amiibo. A demo is currently available to download on the Nintendo eShop.

In addition, Mario Sports Superstars will be released later this year. Unveiled during last September’s Nintendo Direct, Mario Sports Superstars arrives on March 24, and will include Soccer, Tennis, Golf, Baseball, and Horse Racing in local and online multiplayer modes. However, each player will need a copy of the game to access multiplayer modes. For a limited time, the game will include one Amiibo card which will give players in-game bonuses. A set of Amiibo cards for the game will be launched as well, with the SRP of $4.99 per pack of five.

A new IP, Tank Troopers will arrive on the Nintendo eShop February 16. A multiplayer-focused experience with up to six players, Tank Troopers features a cast of zany and colorful character with a variety of maps and modes. Players can battle against each other in teams or free-for-all in local multiplayer matches.

Finally, two more 3DS titles will join the Nintendo Selects budget line of titles in February: Kirby Triple Deluxe as well as Mario & Luigi: Dream Team will be the next games re-released for the handheld with a new price of $19.99.