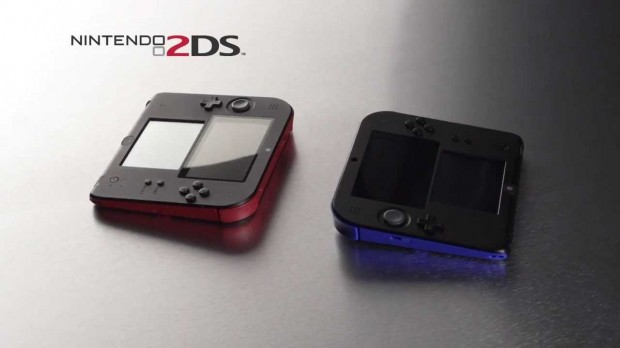 The Nintendo DS lineup is getting a new member this fall.  The 3DS has taken off with an influx of newer games, but it seems that Nintendo wasn’t content with dominating the handheld market–they have to own it entirely.  To this end, they’ve stripped the 3DS of its distinctive 3D capability (not to mention its hinges) and offered a big discount, slashing the price down to  $129.99.  What does that get you?  Lots.

Nintendo 2DS plays the entire library of packaged and downloadable games for Nintendo 3DS only in 2D.  Nintendo 2DS maintains many of the same hardware features as Nintendo 3DS: dual screens, game-play controls and touch-screen features. The system also has backward compatibility with the existing library of more than 2,000 Nintendo DS games, as well as access to wireless connectivity features like multiplayer online game play, fun Nintendo Video content and great digitally delivered games in the Nintendo eShop.

This is a smart move for Nintendo. The DS remains one of the best consoles ever, and the 2DS is essentially the upgraded DS we’ve all be pining for–hopefully without the 3Ds’s short battery life.  The form-factor is kind of strange, but I’m willing to give it a shot.  The 2DS won’t be out until October 12, but until then, check out the video of the 2DS in operation below!