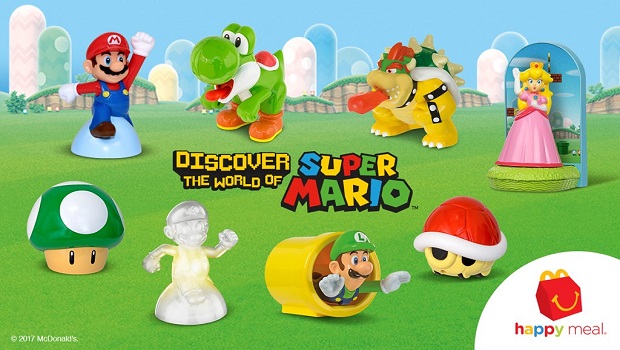 A collaboration with Nintendo and McDonald’s has ended up in some tasty news: Nintendo has released new Mario toys for McDonald’s Happy Meals from now until May 22. The eight toys will be available across participating McDonald’s restaurants across the United States and coincide with the promotion for the upcoming Mario Kart 8 Deluxe for Nintendo Switch.

“Nintendo is always looking for ways to expand its brand, and a partnership with the family-friendly McDonald’s restaurants felt like a great fit,” said Doug Bowser, Nintendo of America’s Senior Vice President of Sales and Marketing. “Like Mario, Happy Meals are something both kids and parents grew up with.”

The eight toys include Mario, Luigi, Princess Peach, Bowser, Yoshi, Invincible Mario, a Red Koopa Shell and 1-Up Mushroom. Each one of the toys has a special function, like a translucent Mario that lights up in different colors.

In addition to the toy line, McDonald’s has announced a giveaway for those using the McDonald’s mobile app, which includes the chance to win one of 100 Nintendo Switch Prize Packs. By redeeming deals within the application as well as purchasing Happy Meals, customers can receive entries to win a Nintendo Switch as well as other goodies.

UK versions of the game bought on the official store come with a Luigi death stare shirt. No, really!

Mario Kart 8 Deluxe will be released on April 28 for the Nintendo Switch. Read up on Matt Welsh’s review here, and stay tuned for more news on Gaming Trend.