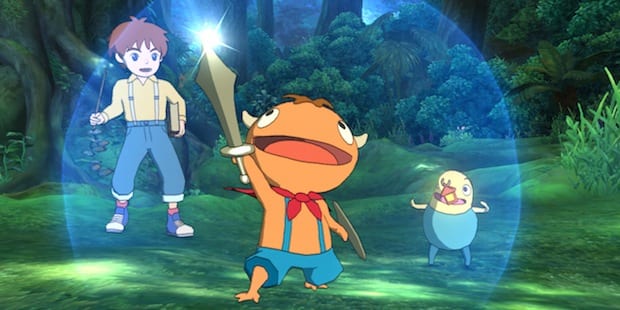 I can’t speak for the rest of my peers at Gaming Trend, but Ni no Kuni: Wrath of the White Witch has been my most anticipated JRPG since Final Fantasy XII. With visuals provided by acclaimed animation powerhouse Studio Ghibli and a deep monster-collecting battle system developed by Level-5, everything about this game screams “master-class.” While 2012 has been rather lacking in games called Ni no Kuni, Namco Bandai seeks to rectify this by releasing a demo for the upcoming RPG on Decmber 4th in North America, and December 5th in Europe. Here are some of the things you can look forward to in the next PSN Store update

Players will be able to experience two different levels of the game where they can test their mettle against a couple of the game’s most infamous bosses: Guardian of the Woods and Moltaan.

Ni no Kuni: Wrath of the White Witch is an epic JRPG developed by the critically acclaimed development studio, LEVEL-5. The game features animations and cut-scenes that are produced and supervised by the legendary Japanese animation company, Studio Ghibli. The music in the game was composed by the world-renowned music composer Joe Hisaishi.

This is shaping up to be the interactive Hayao Miyazaki movie we’ve all been waiting for. Ni no Kuni: Wrath of the White Witch will be available in North America on January 22nd, and in Europe on January 25th, exclusively on Playstation 3.