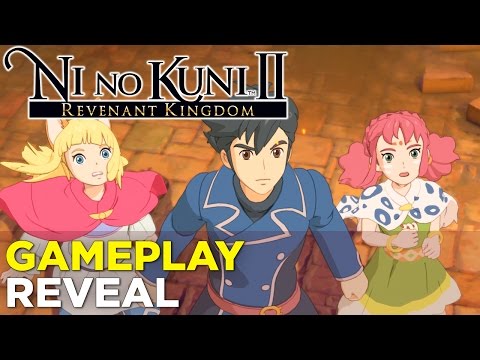 Bandai Namco has announced that Ni no Kuni II: Revenant Kingdom, Level-5’s sequel to the PlayStation 3 exclusive RPG, is coming to PC as well as PS4.

The sequel to the widely popular JRPG (Ni no Kuni: Wrath of the White Witch) was first announced in 2015 at Sony’s PlayStation Experience presentation keynote. We got our first glimpse of Ni No Kuni II’s gameplay at last month’s PSX presentation, and it’s looking a bit more realistic than the series’ previous anime-inspired titles.

2013’s Ni no Kuni game featured anime cut-scenes from Studio Ghibli, which informed the overall art style of the game. For Ni no Kuni II, Bandai Namco has confirmed that Studio Ghibli animator Yoshiyuki Momose has been participating in the game’s development.

Ni no Kuni II stars Evan, a child king who is dethroned after a coup is launched, and Roland, an older man transported from an alternate world to aid the young king and act as his mentor in their quest to reclaim the kingdom of Ding Dong Dell. This land is inhabited by beings known as Higgledies; these spritely lifeforms, invisible to all but those with pure hearts, will help Evan, Roland, and their orphaned, tomboyish companion Tani, in battles and as they explore the game’s overworld.

Exploring Ni no Kuni II’s world takes two forms: on a zoomed-out level, players will explore the overworld from an eagle-eye perspective, while combat and core gameplay encounters will occur in more zoomed-in spaces through a third-person perspective. Like previous titles in the series, combat in Ni no Kuni II occurs in real time, and players will be able to switch between party members.

Ni no Kuni II: Revenant Kingdom will be released simultaneously on PS4 and PC in 2017.