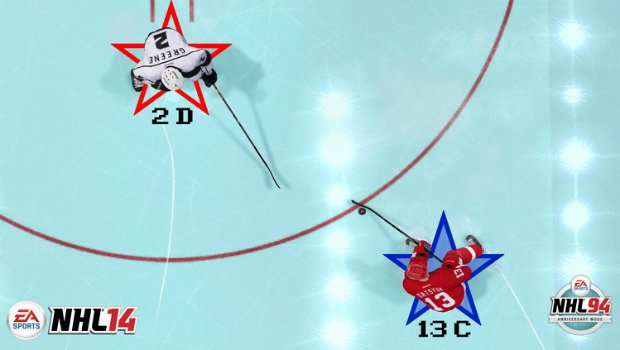 In a nod to one of the most popular hockey games in the history of the sport, EA Sports upcoming NHL 14 will feature a new mode, dubbed NHL 94 Anniversary Mode.  Celebrating 20 years of building on the NHL 94’s success, this mode promises to make us all nostalgic for the days when goals where big and even the indicators were stars.

Utilizing the NHL 14 game engine, the NHL 94 Anniversary Mode will sport an updated look and feel but will play almost entirely like it’s two decade old namesake.  There will be no hyper-analog superstick controls, nor will there be lame restrictions like rules (seriously, no rules) holding you back from hockey glory.  A simple three button control (one to pass, one to shoot, and of course, one for turbo) will be all you need to score those goals and lead your team to victory.

Visually, the mode will utilize the little star icons underneath players, and plays on a blue-hued ice.  The in-stadium graphics, such as the scoreboard and the digital banners, will all sport a classic 16-bit look.  Classic organ sounds will play during the games.  EA Sports even promises a few surprises for the mode, an enticing treat for all fans of the golden age of video gaming.