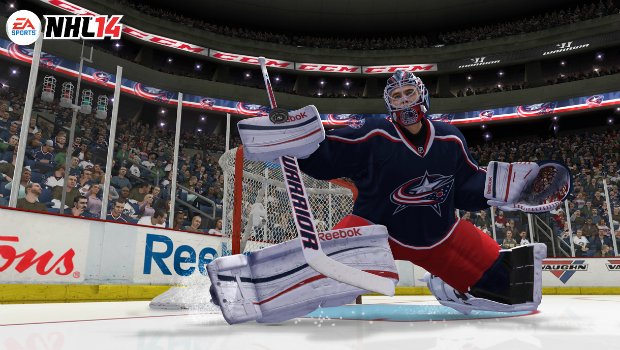 The demo for EA Sports’ NHL 14 has been released for the Xbox 360 and Playstation 3 consoles.  The NHL 14 demo features three modes: the NHL 94 Anniversary Mode, Play Now, and Hockey Ultimate Team (HUT). The NHL 14 demo is available for download in Europe on Xbox LIVE today and tomorrow, August 21, on PlayStation Network.

In the Play Now mode, players will be able to control either the Chicago Blackhawks or the Boston Bruins in a quick third period to get a feel for the game and it’s new features.  Players will be able to field one of the best teams in Hockey, providing a chance to see how the best in hockey will look and feel in the game.  The defending conference champions and last year’s Stanley Cup opponents also meet in a look at NHL 14’s new NHL 94 Anniversary Mode, again allowing the player one third period of play.

Lastly, players will be able to get a taste of what Ultimate Team is all about, building a team and taking place in a mini tournament against the Halifax Mooseheads, the Bruins, the Blackhawks, and finally the formidable Team Canada.

Each mode is a nice little taste of what will be in store for the full game, and should be a fun hold-over for the real thing.  NHL 14 is in development at EA Canada in Vancouver and has been rated E10+ by the ESRB.  Become a fan of EA SPORTS NHL on Facebook and follow them on Twitter for more updates.