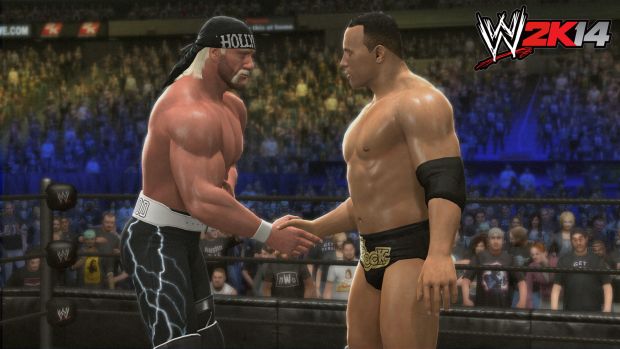 Today 2K Games has released a new trailer highlighting the signature moves of multiple WWE Superstars. The superstars featured include The Rock, Hulk Hogan, The Undertaker, Daniel Bryan (Yes), Ultimate Warrior, Goldberg, and The Shield. Obviously, there are more signature moves to be seen but you’ll have to click the nice little video to see them! It still shocks me that WWE and 2K have managed to get people like Ultimate Warrior, Goldberg, and Hulk Hogan to cooperate on this game. More power to them!

Become Immortal – 2K’s lineup of premier sports simulation titles expands with the Company’s upcoming release in the renowned WWE video game franchise, WWE 2K14.  Developed by Yukes for the Xbox 360 and PlayStation 3 system, WWE 2K14 is positioned to be the most electrifying, authentic and comprehensive WWE video game experience to date. WWE 2K14 is rated “T” for Teen by the ESRB.

WWE 2K14 releases for the Xbox 360 and PS3 on October 29th, November 1st internationally. Folks who pre-order the title will get The Ultimate Warrior free of charge on launch day.