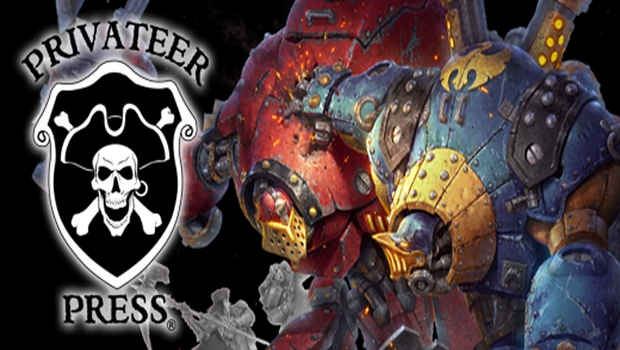 Privateer Press might not have the name recognition of Games Workshop, but they have been releasing quality product for a while now.  I first heard of them from their Monsterpocalypse games, but they have much more than that.  Their most popular games seem to take place in their Iron Kingdoms setting, and they have announced their two miniatures games in that setting, Warmachine and Hordes, are getting new versions.

Privateer Press has announced new editions of its award-winning WARMACHINE and HORDES tabletop miniatures games. The new editions will be released worldwide in independent hobby game stores on June 29, 2016. Privateer Press will release the new Core Rules for each game for free online on June 12, 2016. Players will get their first chance to play the new edition at Lock & Load GameFest 2016 in Bellevue, WA, heldJune 10-12.

“The current editions of the games are now six years old,” said WARMACHINE and HORDES creator and Chief Creative Officer Matt Wilson. “During that time we’ve accumulated a tremendous amount of knowledge and experience from observing, listening to, and interacting with our worldwide community of players and retailers about how to continue to improve their experience with our games. After years of intensive work, we’re finally ready to share the outcome of that process and give our community what they’ve been asking for in our games.”

The new editions of WARMACHINE and HORDES have been updated and redesigned to be quicker to learn while providing a more intuitive game play experience. Releasing alongside the new core rulebooks—WARMACHINE: Prime and HORDES: Primal—will be twelve new Faction Decks, one for each faction in the games. Each Faction Deck contains copies of every stat card previously released for that faction, updating a player’s entire card collection to the new edition.

Additionally, nine new Battlegroup Starter Boxes will be available at launch, and each one will introduce a new warcaster or warlock character to the games along with all the models needed to form a complete starting battlegroup. Warcasters and Warlocks are the leaders of their factions and greatly influence the performance of the player’s army on the tabletop. The Battlegroup Starters, offered at $39.99 MSRP, will also contain a Rules Digest, a Basic Training Tutorial Guide, four dice, model stat cards, a Battle Map, an obstacle card, tokens, a flexible 18” ruler, a 22-page Introductory Guide featuring army building advice, a hobby painting tutorial, a faction strategy guide, and new fiction about the warlock or warcaster in the box.

German and French language translations of WARMACHINE and HORDES will also be available through their partners Ulisses-Spiele, Victoria Games, and Cerberus Entertainment upon launch on June 29th and at localized events like the Lock & Load Outposts on June 11th.

The launch will feature different promotions throughout the world. In North America three different launch kit bundles will be offered through Privateer’s distribution partners, each designed for a particular community size and stock volume of independent retail stores. Launch kits will ship with a special Field Kit promotional giveaway bundle that includes a branded dice bag, glue, card sleeves, and a dry erase marker with the purchase of a new Battlegroup Starter Box. Launch Kits also include a free Journeyman League Kit to get new players started in the game and four demo battlegroups that can be used to teach and promote the games. Deluxe and Premium launch kits will also ship with additional upgrades, including replacement card decks and a Full Steam Launch Event Kit. Premium launch kits will also include a free a demo table and one free, signed, limited-edition copy of WARMACHINE: Prime and HORDES: Primal.

Privateer Press will be releasing much more information about the all-new editions of WARMACHINE and HORDES leading up to Lock & Load GameFest 2016 at PrivateerPress.com, and on Facebook and Twitter.

I’ve heard good things about these games, and the miniatures look really nice.  If you have been curious about the system, this might be the time to jump in and take a look.  Check out their web page for more information.