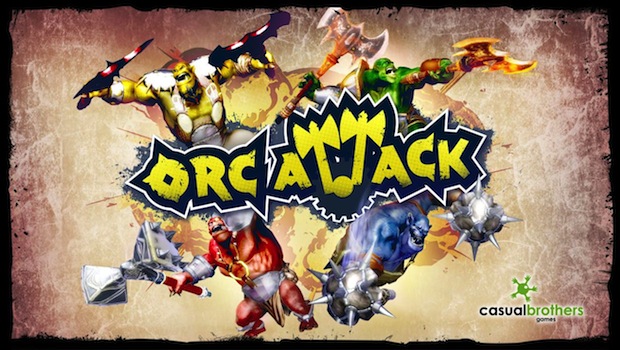 In addition to the trailer, today’s press release included box art, a current game description, and fresh details on the systems the game will be featured on. Check out the wonderfully irreverent breakdown of what gamers can expect from this title, which also details the basic premise:

Fart or die in this hack-and-slash action game, where fun-loving Orcs battle pollution-loving Humans in a humorous fantasy setting. Orcs have become victims of brutal Human expansion, as they have carelessly poisoned the environment. Now, four trained Orc heroes are retaliating with a not-so-silent yet very deadly plan. In either single-player or up to four-player co-op, you will take on the role of Orcs, each wielding a unique, gaseous ability, and then take the fight to the Humans in a stinky, fart-filled romp.

So, yeah. Farts. This type of humor looks to underscore the whole game, so if you’re into that kind of thing, you’ll be able to play Orc Attack on PC, PSN, and XBLA later this year (as yet, a specific release date has not been announced). Personally, I think it looks pretty funny, and I like the idea of flipping the evil Orcs / LOTR dynamic on its head, along with creating a nice allegory for humans screwing up the environment. Check out the trailer below (along with some Orc-tastic screenshots) to get a better sense of the gameplay, and be sure to check back often for future updates on this release.