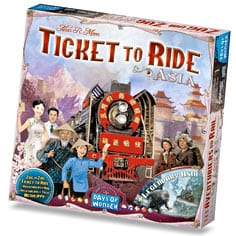 The Ticket to Ride series has been one of the most popular board games since it came out.  It’s considered one of the three “gateway” games.  You can play it online, as well as on the Xbox 360 and iPad.  Each successive game has added a couple of new wrinkles to it, but it has always kept its simplicity.  A while back Days of Wonder had a contest for people to design new maps for Ticket to Ride.  They were so impressed with the quality that they not only have named one winner, but they annonced two winners.

To celebrate the ever-growing Ticket to Ride player community and Days of Wonder’s upcoming 10-year anniversary, the company recently organized a $10,000 Ticket to Ride Map Design Contest. 612 Ticket to Ride fans and aspiring game designers from 40 different countries submitted their own maps for a chance to win the $10,000 cash prize. Perhaps even more exciting was the possibility of seeing their design published in the Ticket to Ride Map Collection to be officially introduced at Essen SPIEL 2011, alongside a brand new team-play map accommodating up to 6 players, created by original Ticket to Ride game designer, Alan R. Moon.

A long evaluation process revealed two exceptional contest entries. As a result, the company doubled the prize and selected two Grand Prize winners: François Valentyne from Toronto, Canada, with his map of Legendary Asia, and Ian Vincent from London, UK, whose map explores the Indian subcontinent. Each winner earned the $10,000 Grand Prize and will see his design in the upcoming volumes of this collection.

The new maps sound intriguing, and more maps for Ticket to Ride is a good thing.  I can’t wait to get my hands on them.