With the ever increasing number of games with controls optimized for the console controller, a quality gamepad is almost a necessity for a serious PC gamer nowadays. Games like Dark Souls: Prepare to Die Edition or Arkham City are shipped with disastrous mouse/keyboard mappings that are almost unplayable.

That’s why I’ve always thought my Onza TE was a great choice, featuring responsive buttons, adjustable analog sticks, and a comfortable form factor. It was meant as an alternative to the Xbox 360 controller, but it more than served it’s function on my PC. It wasn’t perfect, though. Users complained that the button placement was awkward, and it tended toward fragility. Well, it looks as though Razer listened to the questions concerning the Onza TE and applied them to their newest gamepad, the Sabertooth.

The Sabertooth looks like it will feature the familiar layout of the Xbox 360 controller, though it will have a few reprogrammable buttons on the edges, as well as a pair of removable “triggers” between the LT and RT buttons. Be sure to check out the video and press release below to see a few of the new improvements and features, but the press release sums them up like this:

The Razer Sabertooth is an extraordinary Xbox 360 controller. Six additional remappable buttons – two at each shoulder of the controller and two removable rocking switches at the bottom – allow gamers to re-bind any choice of buttons on the controller for easy access. A built-in OLED screen is also included, which allows customization of the controller’s many features. Gamers may remap the multi-function buttons, adjust the analog stick’s sensitivity and save profiles:  the display visualizes their modified preferences.

Razer is also offering an incentive program for people looking for a reason to upgrade to the Sabertooth from the Onza TE. Owners of the Onza TE will get 10 dollars off the Sabertooth if they choose to buy it from Razer’s online store.

I’m really looking forward to getting my sweaty palms around this gamepad. If you haven’t guessed already, I love my Onza TE and this looks to be an incremental improvement on an already worthwhile gamepad. Keep it locked in to Gaming Trend for more coverage of the new controller as soon as we get our hands on it. 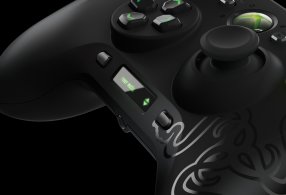 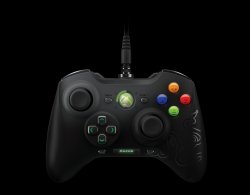 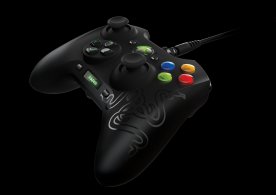 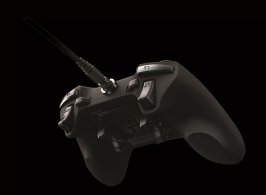 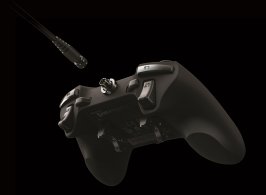