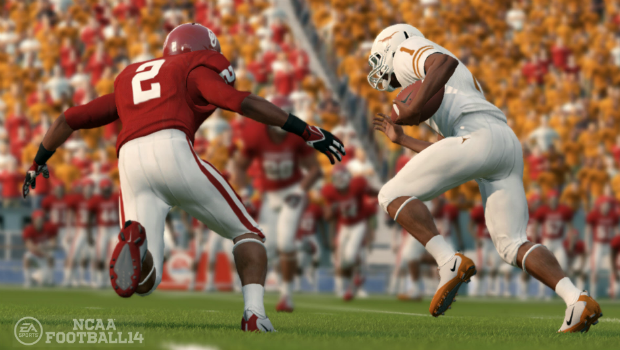 Many of the changes focus on the in-game experience.  New commentary from Brad Nessler and Kirk Herbstreit focuses on in-game happenings and impact players, and this year’s version will include a halftime show featuring ESPN personalities Rece Davis and David Pollack.  Over 500 new on-field vignettes, as well as new on-field player chatter will enhance the ambiance between plays and quarters, and each colleges band will now play popular marching band staples, such as The White Stripes hit “Seven Nation Army.”

For the first time ever, neutral site games have been included in NCAA Football.  Finally, the greatest rivalry of all time, The Red River Rivalry, can see the mighty digital Oklahoma Sooners march into Cowboys Stadium and stomp the Texas Longhorns in the true and rightful place of that stomping.  Many great rivalries are played on neutral sites, with larger crowds and crazy atmospheres, and it’s great that NCAA Football will finally capture that key part of the college football season.

New sleek menus have been designed to cut down on navigation time.  In addition, information about matchups, injuries, line-ups, and other options will be viewable and changeable during loading screens.  Evolving insights on key players and drive summaries provide deeper, richer context to each game than ever before.

Fans are encouraged to keep up to date by visiting the NCAA Football website, Facebook, and Twitter for exclusive assets and unique insights into all this year’s new features. College football enthusiasts can also get involved in the conversation by tweeting with the hashtag #PLAYTRUE.