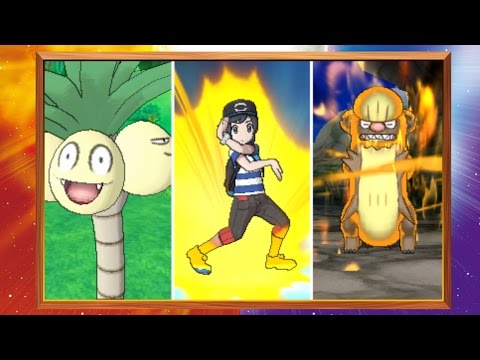 Alola Forms, new variants of preexisting Pokemon, were shown for Exeggutor, Vulpix, Ninetales, Sandshrew and Sandslash. The new Exeggutor is a Grass/Dragon-type with a much longer neck, while the other four Alola Form Pokemon shown are all Ice-types and sport a glacial-white skin.

Oricorio, one of the six new Pokemon revealed in the trailer, is a new bird Pokemon that comes in four different forms. Depending on which of the game’s islands it appears on, Oricorio may appear as a Fire, Psychic, Electric, or Ghost-type. The trailer also revealed Minior (a Rock/Flying-type), Grass-types Fomantis and Lurantis, Gumshoos (the evolved form of the previously-revealed Yungoos), and Mudbray (which evolves into Mudsdale).

A new feature called Ride Pokemon allows you to ride on the backs of your Pokemon. The trailer shows gameplay of the player riding a Tauros, a Mudsdale, a flying Charizard, and a surfing water Pokemon.

Two new battle mechanics were also revealed in the trailer. Totem Pokemon, part of the new Island Trials quest line, have the ability to gain advantage in 1v1 battles by calling for help from other Pokemon. Gameplay from the trailer shows a Totem Gumshoos summoning a Yungoos to join him/her in battle against a loan Pikachu. Also new to Pokemon battles are Z-Moves, powerful type-based moves which can be used once per battle. Each Pokemon type gets its own Z-Move, like Gigavolt Havoc for electric-types and Inferno Overdrive for fire-types

Pokemon Sun and Moon comes to the Nintendo 3DS on November 18. For more new Pokemon coming this fall, check out the last trailer released by The Pokemon Company.