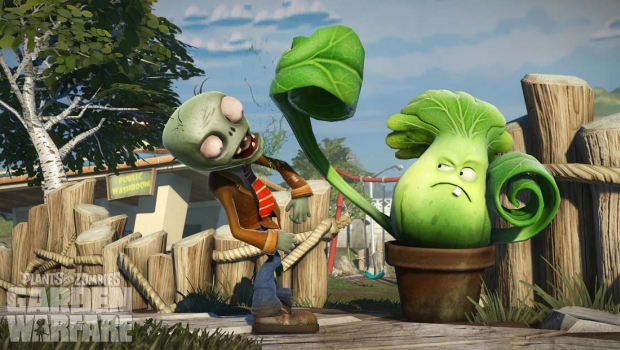 EA is in OVERDRIVE this morning! Today they’ve revealed some new features for our “Biggest Surprise of E3 2013” winner, Plants vs. Zombies: Garden Warfare. The game will feature support for Kinect and Xbox SmartGlass gameplay, customization for your characters and loadouts, and much more. Here’s what they announced this morning:

PopCap Games, a division of Electronic Arts Inc. (NASDAQ: EA), today revealed a host of game features planned for its highly anticipated, immersive action experience, Plants vs. Zombies™ Garden Warfare. Plants vs. Zombies Garden Warfare will roll-out first, exclusively on Xbox One, the all-in-one games and entertainment system from Microsoft and the Xbox 360 games and entertainment system from Microsoft, with pre-orders being taken now in advance of the game’s launch in Spring 2014.

With its first reveal in June, we blew fans away with a glimpse of a game that takes the Plants vs. Zombies world to an entirely new genre,” said Tony Leamer, Plants vs. Zombies franchise director at PopCap. “Here at gamescom, we’re showcasing even more exciting elements, including Kinect for Xbox One and Xbox SmartGlass gameplay in Boss Mode, playable Zombie classes, character customization, and more. These amazing features will help make this one of the must-have action games of 2014.

I’m rather surprised to see the timed exclusive for the title, but it also carries some exclusive modes for the Xbox One. You can pre-order the game starting today for the 2014 launch. Here’s a quick rundown of some of the new features announced at gamescom:

– Kinect and Xbox SmartGlass gameplay in Boss mode, command the battlefield from above in Crazy Dave’s RV or Dr. Zomboss’ blimp