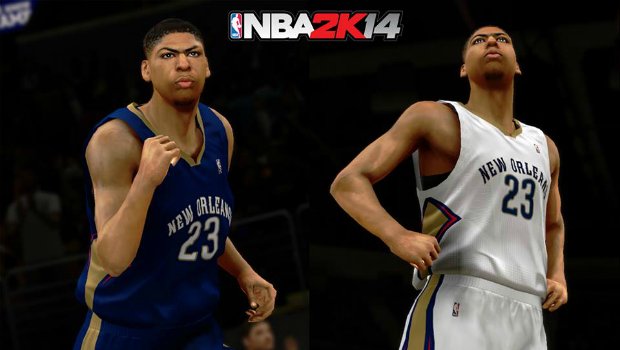 2k has revealed the new jerseys for the re-branded New Orleans Pelicans, releasing a screenshot of former #1 overall pick and world renowned unibrow apologist Anthony Davis sporting the new duds on the digital court.  The new swag comes on the heels of the official reveal and annoucement from the New Orleans based franchise.

The new jerseys are very basic, and the color scheme leaves something to be desired.  Joining the Wizards, Clippers, Hawks, Sixers, and Pistons in donning red and blue, the Pelicans have pushed that color scheme usage rate up to 20% in the NBA.  Also, New Orleans has ditched the unspoken rule that home jerseys display the team name, and away jerseys display the city, opting for New Orleans to feature on the front of both jerseys.  While the new look certainly isn’t inspired, there is a tasteful simplicity to them.  The design is very reminiscent of the LeBron James era Cleveland Cavaliers jersey, a classic look that’s been missed in the NBA.

As for in the upcoming 2k NBA game, the new look Pelicans are sure to be a welcome addition to many “fantasy drafters” who have grown weary of the same old teams and jerseys.  The excitement is so overwhelming, it makes me want to use my long beak and large throat pouch to catch prey and drain water from the scooped contents before swallowing.

Those who care to see an actual look at the jerseys can get an eyeful here, as well as some analysis from Uni Watch, the world’s finest in sports uniform reporting.

Developed by Visual Concepts, a 2K studio, NBA 2K14 is not yet rated by the ESRB.  NBA 2K14 will be available on the Xbox 360, Playstation 3, and PC, as well as the upcoming Xbox One and Playstation 4 as a launch title.