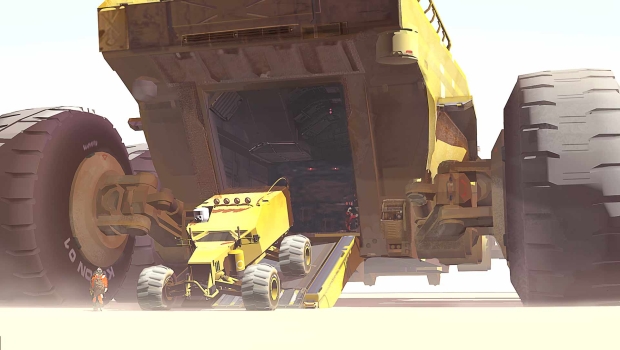 The team at Blackbird Interactive (a team comprised of the original creators of Homeworld and Homeworld 2) wants to show off the Baserunner – a massive truck in their upcoming RTS HARDWARE: Shipbreakers. The Baserunner serves as an armored transport vehicle (or as us .mil folks would say, an “Ass hauler”) for the ground fleet. The trailer also goes over how this vehicle is used, but also goes over some of the lore and the art style that is going into the game.

In the same spirit of visual excellence that has defined previously released assets for HARDWARE, this new trailer begins to explore the immense depth of the game universe’s lore, which also demonstrates the same epic art style that made Homeworld a cult classic years ago. The closed beta is scheduled to launch in Q4 2013 and is now open to applicants. Players can support the game’s development through the purchase of limited edition pre-sale packages at www.blackbirdinteractive.com/store/.

Yep, looking at the art style I’d say they’ve nailed it. Homeworld stands singular against ALL other RTS titles as the most original concept I’ve encountered in a dirt-farming game. I’m eager to see what Blackbird Interactive will have to show us once again.