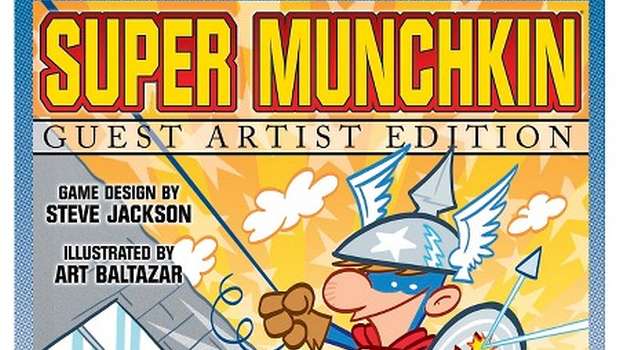 Superheroes are big right now.  From the big screen to the small screen, comic books are coming to life.  While there’s the DC Deckbuilding Game, Heroes Chronicles, and Sentinels of the Multiverse, the superhero genre is sparse for the tabletop.  The next Guest Artist Edition of Munchkin has been released from Steve Jackson Games, called Super Munchkin.

The art in a new superhero-themed Munchkin game comes from the pencil of award-winning comics illustrator and writer Art Baltazar.

Fans of comics may know Baltazar for his independent work on The Big Amoeba and Patrick the Wolf Boy, and for his work on DC’s Billy Batson and the Magic of Shazam! and Tiny Titans, for which he won a prestigious Eisner Award in 2011.

Players in Super Munchkin Guest Artist Edition are superheroes fighting the expertly drawn Slobbering Alien Horde, Office Supplies Man, The Fandom Menace, or Misunderstood Man. They get help from gear like their Heroic Angst, a Plot Device, or even a Continuity Error.

“Playing this game made me feel like a superhero,” said Steve Jackson Games’ Community Manager Hunter Shelburne. “I can’t actually fly yet, but I’m confident that if I play it a few more times, that will come.”

The release is available exclusively at Target and is part of our Guest Artist Edition line of Munchkin games. Steve Jackson Games is publishing these limited print run games to celebrate 15 years since the original game’s 2001 release.

The humor of Super Munchkin is sure to have its tongue firmly planted in its cheek.  However, if you know a comic book fan, you might want to head to Target to pick up this edition.