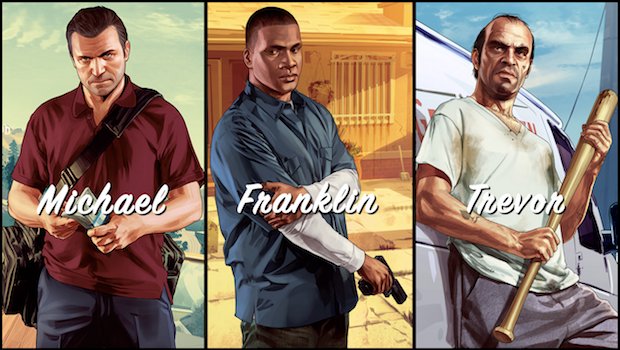 Well, the title of this post pretty much gives you the gist here, but I was very excited to see what Rockstar has cobbled together in the 7 months since we last caught a glimpse of in-game footage for the fifth installment of Grand Theft Auto. The trailers are literally being released as I write this, and we’ve got all three right here for your viewing pleasure. This game is going to be huge, both in terms of square footage and popularity, so let’s be honest with each other for a minute – you can’t not watch this. Drop what you’re doing and let’s see what Rockstar North has bestowed upon us.

So here’s what we actually have here: three trailers, each featuring one of the new protagonists that you’ll get to play as. First, there’s Michael, the wannabe-straight-laced guy who got pulled back into a life of crime after cutting a sweet deal with the notorious F.I.B. Then you’ve got Franklin; picture a black version of Ryan Gosling from Drive – he’s not really a criminal, but he’s got some finely tuned skills behind the wheel, and I mean come on, who could resist all that cash? Michael seems to be the one who ropes him into these nefarious dealings, but it will be interesting to see how the drama actually plays out. Last but not least, there’s Trevor. This guy looks to be nothing less than a junkie psychopath, embracing his niche as “the wildcard” in all its unpredictable glory and splendor. He likes to arm himself with weapons that maim rather than kill, and he spends way too much time in a trailer out in the desert, lost in drug-fueled hallucinations of one sort or another. In other words, this guy will be pretty fun to control (so to speak).

Each of the clips gives you a nice glimpse into their various personalities. Rockstar has made it clear that you will be switching between them as the story progresses, and when you’re playing as one guy, the other two will go ahead and carry on with their daily routines, rather than freezing up in some meta-existence where nothing changes from the previous time you played as them. The interplay sounds like it will add even more layers of complexity to a series that just seems to keep on getting better, and I’d be lying if I said I wasn’t ticking off the days until this one hits the shelves. Feast your eyes on the goods below, and let us know what you think in the comments section!