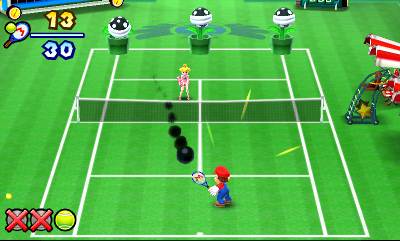 Mario has been dabbling into sports a little this generation.  We’ve seen him Karting and go to the Olympics on the Wii and DS, and play baseball and soccer on the Wii.  We haven’t had any Tennis games though.  That will change when Mario Tennis Open is released later this month.  Today Nintendo announced a couple of features included in the 3DS game.

Following last month’s unveiling of the Special Games mode in Mario Tennis Open, Nintendo has revealed even more details about the upcoming game, which launches for the portable Nintendo 3DS system on May 20. In addition to the variety of fun tennis games with a Mario twist in Special Games mode, fans will be able to connect with friends for online matches, enjoy new StreetPass features and unlock bonus game characters through game play and special QR Codes.

At least this 3D version of the game won’t give us eye troubles like the Virtual Boy did.  Take a look at the full Press Release to find out what features you can look forward to.