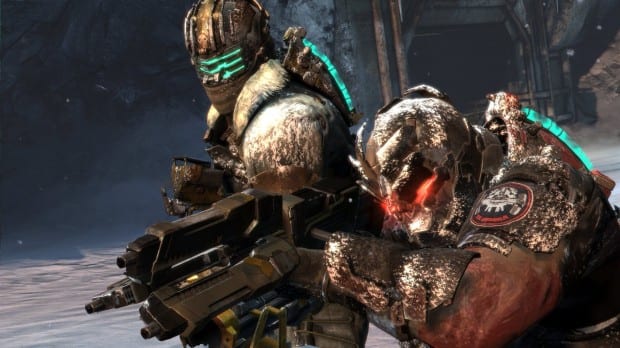 Know what’s awesome?  Cutting through Necromorph limbs with a plasma cutter.  If you have no idea what I’m talking about, you have two games you need to purchase fairly immediately.   I’m of course talking about Dead Space 3, and we’ve got a new trailer to show off.  This trailer, entitled “Two Ways to Play” shows off some of the cooperative or single player options you’ll have and the way the story changes as you play between them.  Toss in drop-in and drop-out online co-op and you’ve got a title to make you jump off the couch with friends or without.   Here’s a nibble from the official description of the title:

Dead Space 3 brings Isaac Clarke and merciless soldier John Carver on a journey across space to discover the source of the Necromorph outbreak. Crash-landed on the frozen planet of Tau Volantis, Isaac must comb the harsh environment for raw materials and scavenged parts. He will then put his engineering skills to the ultimate test to create and customize weapons and survival tools. The ice planet holds the key to ending the Necromorph plague forever, but first Isaac must overcome avalanches, treacherous ice-climbs, and the violent wilderness. Facing deadlier evolved enemies and the brutal elements, Isaac can choose to team up, not only for his own survival, but for that of mankind’s. Play together with a friend or go it alone as Isaac Clarke using the seamless new drop in, drop out co-op functionality. Each mode offers unique story elements and gameplay.

These games are pretty nightmare worthy, and that just makes me want to play them more.  Look for our continued coverage as we move towards the very-near February 5th release date!