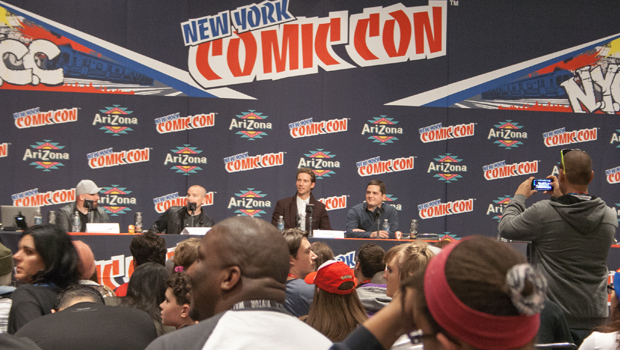 Earlier this evening at New York Comic Con, Warner Bros. Interactive Entertainment made the first-time announcement of a New Batman: Arkham Origins game coming soon to iOS and Android. And Gaming Trend was lucky enough to be among the first to take it for a spin.

Developed by NetherRealm Studios, in close cooperation with the WB Games Montréal console version, Batman: Arkham Origins for iOS and Android, similarly takes place during the tumultuous second year in the Dark Knight’s career when he’s just starting to make a name for himself while learning the ropes of the crime fighting trade. He’s no pushover, but he’s still got a few lessons to learn before becoming the invincible defender of justice we all know today. And that’s exactly when the crime lord, Black Mask, sends eight of the world’s deadliest assassins to hunt down and kill the caped crusader.

[singlepic id=16613 w=320 h=240 float=left]The exciting announcement for the mobile game was made during a Batman:Arkham Origins NYCC panel featuring actors Roger Craig Smith (Batman), Troy Baker (Joker), and Eric Holmes, the game designer for Arkham Origins. Besides the announcement for the mobile title, the evening’s highlight came when Troy Baker was persuaded by a fan to perform Alan Moore’s “Madness is the emergency exit,” monologue in the voice of Joker (just wait for it to surface on YouTube). The spellbound crowd erupted into a well-deserved standing ovation.

Batman: Arkham Origins Mobile is designed specifically with the touchscreen in mind, and it aims for a more arcade-style experience than the console version. Every move is executed using a series of taps and swipes across the screen. Tapping with one finger executes Batman’s signature combos, swiping activates his brutal special attacks, while touching the screen with two fingers initiates Batman’s blocks and defensive stance. Our quick test drive proved the controls to be intuitive and, once you get the hang of it, it’s a thrilling way to take down villains.[singlepic id=16611 w=320 h=240 float=right]

The fights look and feel awesome. The movements of the characters are well rendered and lifelike. Some of the moves Batman pulls off would put even Bruce Lee to shame. The bone crunching brutality Batman delivers is reminiscent of NetherRealm’s famous fighters, Mortal Kombat and Injustice: Gods Among Us. And I don’t make that comparison lightly – it really does look that good. I actually had to keep reminding myself that what I was playing was on an iPad and not a console. Graphically, this is one of the most impressive mobile games I’ve ever seen.

As you progress through the game and the fights become increasingly difficult, you’ll need to upgrade Batman using Wayne Tech points collected after each battle. These points purchase customizations such as passive skills, suit designs and unique abilities designed to make Batman effective in every situation. The sheer amount of customizing possibilities makes one of the challenges in the game choosing the right upgrade for the occasion. Different suits are designed for specific situations and it’s important to dress for success.

[singlepic id=16612 w=320 h=240 float=left]A lot of effort was made in bridging the mobile and console versions; in fact, NetherRealm utilized many of the same design assets used for the console title. “We created an integrated gaming ecosystem between the Batman: Arkham Origins mobile and console games, which delivers rewards and unlocks that provide greater experiences for players,” said Ed Boon, Creative Director, NetherRealm Studios. “The mobile game goes hand-in-hand with what is offered on the other platforms.”

This cooperative conjunction between the studios allowed for a system of cross console unlocks between the mobile game and the console. Some of Batman’s customizations, such as the mobile game’s Red Son suit, are only playable by first linking the two and, likewise, there are unlockable items featured in the console version that can only be obtained from a mobile link.[singlepic id=16610 w=320 h=240 float=right]

The mobile version of Batman: Arkham Origins will be free to play and, according to our sources, it is coming out very soon. Between that and the console version releasing on Oct. 25th, you won’t have any excuse not to be donning your cape wherever you go.