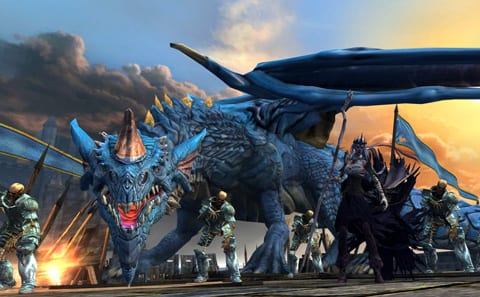 Neverwinter has been an incredible franchise, and the folks at Perfect World are looking to introduce new players back into this awesome world of swords and sorcery in the Forgotten Realms.   Today we get our hands on a video for the Guardian Fighter class – the first in a video series to show off the various classes in the game.   We also have 31 screenshots to show off in addition to our in-game footage.   Mmm….tasty, tasty media awesomeness.   If you haven’t heard about this upcoming MMO, here is a bit from the Wiki page:

Briefly assuming her pre-Lich appearance, the Lich Queen Valindra attacks the soldiers of New Neverwinter, as new grounds are being built outside of the original city, which is being similarly repaired. Valindra’s actions spark the Battle of the Bridge, in which Barrabus the Gray and Drizzt Do’Urden are rumored to be present by gossipers at a pub in the shattered Luskan. Each soldier tells his own story of the battle until one soldier reveals that Valindra’s attack was going badly until the Blue Dragon, a leader amongst Thay, would help her escape. The soldier finishes by asking the people where they will be and what they will be doing when the dragon attacks again.

While Thay makes their own advances, the Netherese, under leadership of the necromancer Idris, take the lost artifact Deathknell and use it to forge an alliance with the barrow lords of Ebon Downs, thus providing them with the power to raise an army of dead to raze the Sword Coast. The Netherese have already destroyed the village of Grimhollow, prompting Lord Dagult Neverember, Protector of Neverwinter and Open Lord of Waterdeep, to recover the shards of the Deathknell and defeat the Netherese.

On the other hand Traeven Blackdagger, famed privateer and plunderer of the Sword Coast along Neverwiner, thought dead after the explosion at Mount Hotenow has returned through resurrection and has once again begun plundering. The name Blackdagger travels throughout the Coast, spreading fear through the hearts of all. The Harpers have decided to oppose Blackdagger, sending agents of their own to Blackdagger Keep at morning tide to take down the threat of the ghost pirate

Neverwinter is slated for release in early 2013, so you can expect we’ll see a great deal more information between now and then.   Stay tuned!  In the mean time…videos and screens!