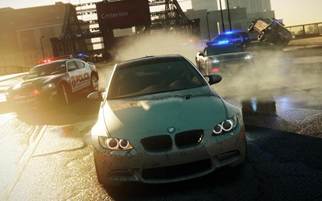 Do you have what it takes to become Most Wanted? Today, at the Electronic Entertainment Expo (E3), Electronic Arts Inc. (NASDAQ: EA) announced that Criterion Games is reimagining Need for Speed™ Most Wanted – a franchise fan favorite and the bestselling Need for Speed game in the series. Designed for a new, more connected generation of racing fans, Need for Speed Most Wanted offers players an expansive open world packed with exhilarating action where they can choose their own path to become the Most Wanted. Players will have the freedom to drive anywhere, discover hidden gameplay, takedown rivals, challenge friends or just hang out and toy with the cops. Everything they do counts towards the end goal of becoming #1 on their personal Most Wanted List. Need for Speed Most Wanted will give players the freedom to race their own way when the game ships October 30, 2012. A special limited edition pack featuring double speed points, custom liveries, pre-customized rollouts and two vehicles: the Maserati GranTurismo MC Stradale and Porsche 911 Carrera S will also ship on October 30, 2012.

They have always had a nice lineup of cars, and playing as the police is always a rush.  Hopefully after faltering with The Run last year, the Need for Speed series will return to form.