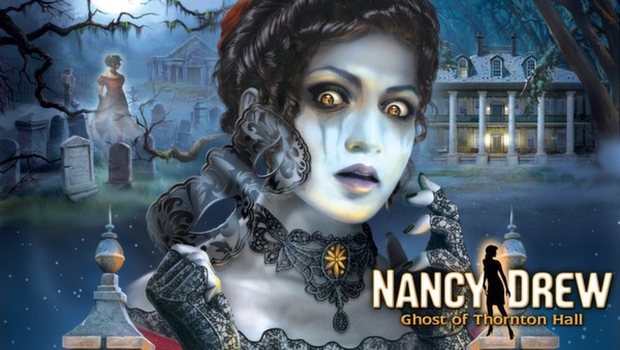 It must be Tuesday – it’s release date time!  The folks at Her Interactive have released Nancy Drew: Ghost of Thornton Hall – a new mystery adventure exclusive to the PC and Mac.   Before you pass up a $19.99 title, let me point out that this is a puzzle-based point and click adventure.   For those of who grew up playing them, that should pique your interest!  The game is the 28th title in the series – I’d suspect that you don’t keep making titles in the same vein if it’s not successful.  Here’s what we know about the game:

In this all-new Nancy Drew adventure, Jessalyn Thornton’s fateful sleepover at the abandoned Thornton estate was supposed to be a pre-wedding celebration, but the fun ended when she disappeared. While her family searches for clues, others refuse to speak about the estate’s dark past. Game players must discover whether something supernatural happened to Jessalyn, or if someone in Thornton Hall is hiding more than family secrets.

The game is a digital download so you can nab it straight from the official site or via Steam.   To kick things off, we’ve got the launch trailer for you to enjoy.   As I mentioned, Nancy Drew: Ghost or Thornton Hall is only $19.99 (or 10% off on Steam, currently!).