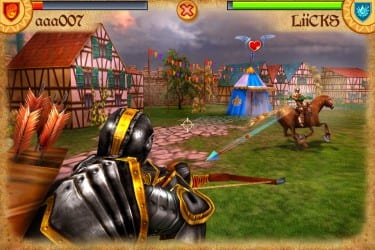 Namco Bandai announced the release of Knights Arena for iPhone today, a free multiplayer RPG which puts players against each other in real-time duels. The game will feature Game Center support and Twitter and Facebook integration. James Kucera, Executive Producer of Namco Bandai Games America, said:

NAMCO BANDAI Games has enjoyed a tremendous year for its growing mobile lineup. With the recent release of the acclaimed Sky Gamblers: Air Supremacy, and today’s release of Knights Arena, NAMCO BANDAI has expanded its roster to include stirring action games, deeply engrossing free titles and all genres in-between.

The game has players upgrading their knight with various weapons and armors. Knights Arena can be found on the App Store for iPod Touch, iPad and iPhone today.