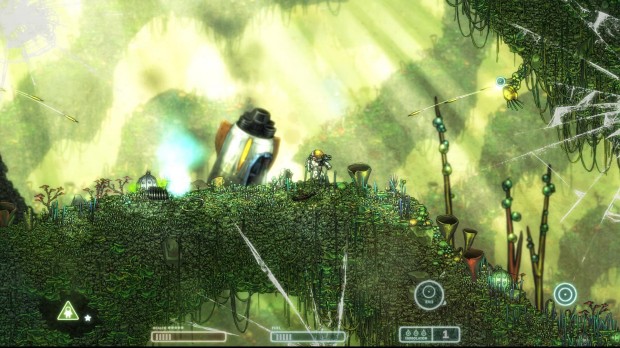 In a rather rare circumstance, Namco Bandai announced and simultaneously released their newest product today entitled “Capsized.” Capsized has existed before on the PC but that version was developed and published by Alientrap, a small Canadian developer based out of Saskatchewan. As a small PC indie game, it’s understandable that they wanted Capsized to branch out onto XBLA and both indiePub and Namco Bandai have allowed them to do so.

Description for Capsized according to the announcement press release:

In the futuristic world of Capsized, the player’s ship crash-lands on a strange and mysterious planet that is presented in a unique hand-drawn art style immersing players into a captivating yet hostile alien environment. Alone and armed with a grappling hook, jetpack, ship supplies and a diverse arsenal of weaponry, players must navigate through perilous landscapes and fight blood-thirsty creatures and Tribal natives to save their crewmates and escape with their lives.

Capsized is available now on XBLA for 800 MS points (10 bucks in human money) and will be published on PSN later this summer.